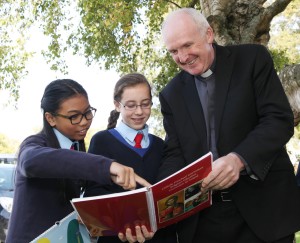 At the launch of the first formal religious education curriculum for Catholic pre-school and primary school on the island of Ireland, Bishop Brendan Leahy welcomed the Pope Francis’s announcement that Dublin will host the World Meeting of Families in 2018.

In his address at the Presentation Girls’ School in Maynooth on Monday, the Bishop of Limerick said, “It is my fervent wish and prayer that Pope Francis himself will join us here in Ireland for this special celebration of faith and family.”

“Education is a key, key, key mission” he quoted the Pontiff as saying.

He said for Pope Francis, families play a vital role in religious education.

He quoted from Archbishop Eamon Martin’s address at the National Eucharistic Congress at the weekend in Knock where the Primate of All Ireland said, “A school catechetical programme alone, no matter how rigorous, will not secure the handing on of the faith. It will succeed only insofar as it builds upon the lived faith experience of the young people in their homes and family.”

He noted that ‘Grow in Love’ has taken great care to emphasise the role of the family, offering a simple and attractive book to be brought home so that the family can continue what has done in school.

“This book offers opportunities for parents to review and chat with their children about the themes that have been covered in school,” he highlighted.

“The launch of the two significant texts today cannot but also imply an appeal to parents: just as you are careful in all other aspects of your child’s upbringing, be generous in your attention given to this core aspect of your child’s life. Children have a right to be helped to articulate the religious sense they feel deep within them.”

He continued, “I believe it is important to provide them with an early training in a language that enables them to express the deepest longing of their heart in faith, prayer and knowledge. We need to help them satisfy the desire of their soul and the thirst of their mind. As Christians, all of us, school, parish community and family are called to recognise that children have a right to the Good News that is the Gospel of Jesus Christ. It is working together at all levels that we respond to that right.”

The two texts, ‘The Catholic Preschool and Primary Religious Education Curriculum for Ireland’ and the new primary school religious education series, ‘Grow in Love’, are written in conformity to the Catechism of the Catholic Church and in accordance with the vision outlined in the Irish Directory for Catechesis, Share the Good News.

The bishops of Ireland hope the curriculum will provide a new impetus for the religious education and faith formation of Catholic children in the whole island of Ireland in the twenty-first century.

Bishop Leahy congratulated Maura Hyland of Veritas on the ‘Grow in Love’ programme which has garnered very positive feedback from teachers.

Dr Anne Hession of St Patrick’s College Drumcondra also addressed the launch highlighted that the new curriculum is a curriculum framework for schools in the Republic of Ireland and Northern Ireland.

“It is the first time in the catholic church’s history that we have had a curriculum document for Irish Catholic primary and pre-schools – so it is very much a new departure.”

Religious education is one of seven subjects on the primary school curriculum both in the Republic and Northern Ireland.

Outlining some of the strengths that the curriculum brings to teachers and the schools, she said they provide a clear outline of the scope and sequence of religious education at primary level so that teachers have a clarity now around what each level is trying to achieve in relation to religious education.

She added that the cultural context in which religious education is being carried out is very diverse and teachers need to be able implement the curriculum with cultural activities in different areas.

“The document opens up the way for the creation of a variety of resources for religious education in the years to come,” Dr Hession suggested.

It also adds to clarity around what catholic schools mean when they say we contribute to children’s spiritual and moral development and to be able to distinguish themselves in a confident way from alternative school models.

Maura Hyland of Veritas described the content in ‘Grow in Love’ as accessible and user-friendly and age appropriate for students.

The pedagogy is based on bringing the children on a journey in each lesson from life to faith to life. Those three movements are called in the series, ‘Let’s Look, Let’s Learn, Let’s Live’.

Children are also introduced to prayer and formal prayer.