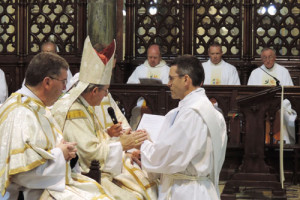 The Chairman of Trócaire, Bishop William Crean, has expressed his concern over “the tragic situation of enormous proportions” that has unfolded in recent weeks for the Rohingya people of Myanmar.

Over 400,000 Rohingya have fled to Bangladesh amid a brutal military campaign in Myanmar’s western Rakhine state which has been seen as ethnic cleansing.

The Rohingya are one of Myanmar’s many ethnic minorities. But the government of the predominantly Buddhist country denies them citizenship and sees them as illegal immigrants from Bangladesh.

According to Bishop Crean, Trócaire is working on the ground in Myanmar and “committed money immediately to the situation” and will keep the situation monitored.

He spoke to CatholicIreland.net after he had ordained six married men at St Colman’s Cathedral on Sunday as permanent deacons for the Diocese of Cloyne.

He also paid tribute to Monica McWilliams, the co-founder and leader of the Women’s Coalition in Northern Ireland, who has been in Myanmar with Trócaire looking at the plight of ethnic minorities, mainly the Kachin in the north of the country.

Some Kachin women spoke to Dr McWilliams about the region’s mining areas where trafficking is occurring.

“The Burmese military profit from these mines, but Kachin armed groups demand ownership of their own natural resources. Locals face land-grabbing with the ongoing battle between the military and armed groups resulting in landmines, endangering lives and forcing villagers to seek safety elsewhere,” she explained.

There are 163 IDP (internally displaced person) camps inside Kachin with over 100,000 inhabitants.

One of those Monica McWilliams met was Columban missionary Sr Mary Dillon from Co Clare who runs the Hope Centre, a clinic for HIV positive patients in need of medical care.

Pope Francis is due to visit Myanmar in November.

Bishop Crean expressed the hope that people’s consciousness of the situation in Myanmar would bring political pressure on the authorities to respond appropriately.

In Cloyne, Fr Bill Bermingham, director of the permanent diaconate, paid tribute to Dr Crean for making the diaconate a priority when he was appointed 2013 and helping the diocese “recover from darker days”, a reference to the Cloyne Report into clerical child sexual abuse which was published in 2011 and followed the resignation of the disgraced former bishop of Cloyne, John Magee in 2010.

The six new deacons include Slovakian father of five, Peter Gurbal who now lives in Cobh as well as 47-year-old John Nestor who lives in Castlemartyr and is a triplet.

Deacon Edward Mulhare, a cabinet maker from the parish to Imogeela-Castlemartyr, has five children aged between 9 and 18 with his wife Valerie.

“This is a great day for the church, the community and for the families. It is a good new story about Cloyne and a new beginning,” he told CatholicIreland.net.

Another deacon, Garrett Cody, who is married to Bridget and works as a manager of Older Persons’ Services for the HSE in Cork, echoed that.

“It is a new beginning and a wonderful joyous day for us who have been studying for the last four years,” the father of three commented.

Three more married deacons are due to be ordained in Cloyne next year, Bishop Crean told CatholicIreland.net