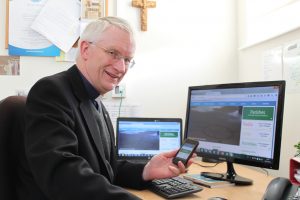 With the General Election less than three weeks away, Bishop Ray Browne has said those putting themselves forward for election to the Dáil are doing something which is “vital for democracy”.

In a statement on the election, Dr Browne identified the challenges facing the country including the need for a living wage for all in work; the “grave housing shortage” and ensuring that everyone has a home; access to hospital care; the needs of the farming community and the urgent need to care for the environment.

He appealed to people “to work together for the common good of all, with a special care for those in need”.

“It is my hope that the next three weeks will give us all a renewed sense that we are one united people and that we want everyone living in Ireland to have the opportunity to live a full life.”

He also urged people to show due respect and appreciation to the 160 representatives who will be elected to the 33rd Dáil.

Elsewhere in his statement, Bishop Browne said, “There is a need to appreciate that our democracy has served us well in the past decade, when you take into account both recovery from the collapse of the Celtic Tiger and Britain’s decision to leave the EU. We have come through difficult times. In the Dáil and throughout the land the atmosphere has remained quite healthy.”

Acknowledging that some people love the local campaign, while others are more interested in the national campaign or the media coverage and that most people love the spectacle of the count, right up to the last seat being filled, he encouraged every person to use their vote.

Separately, Social Justice Ireland has published the first of their two-page Election Briefings covering 10 policy areas ahead of #GE2020.

The first briefing focuses on rural Ireland and outlines a number of issues facing this sector and identifies what the next government can do about them.

Some of the key issues identified by Social Justice Ireland (SJI) in its snapshot include the fact that rural areas generally have an older population, higher rates of part-time employment, lower median incomes, higher dependency ratios and higher poverty rates than the national average.

The average distance to most everyday services for people in rural areas is at least three times longer than for people in urban areas. For supermarkets, GPs and pharmacies, the average travel distance was seven times longer for rural dwellings. This raises challenges for delivery of services.

The driver of the rural economy in Ireland, according to SJI, has moved from a primarily agricultural base to a more diverse base involving services, manufacturing, tourism and others.

Of particular concern is the fact that two out of every five jobs in Ireland are at high risk of automation with towns where employment is dominated by agriculture and manufacturing most exposed to the impact of automation on employment.

SJI stresses that supporting rural households to ensure that they have sufficient incomes will be crucial to the future of rural Ireland.

High quality and connected public transport links and sustainable regional employment opportunities are vital to the future of rural economies while a lack of quality broadband is a considerable barrier to the sustainable development of rural Ireland.

SJI suggests the type of rural Ireland the country should be aiming for is one where there are viable rural communities in all parts of the country, and where people have access to meaningful work, adequate income and decent services and infrastructure.

As to what the new Government can do to build thriving and viable rural communities, SJI recommends that investment should be balanced between the regions and rural development policy should be underpinned by social, economic and environmental well-being.

The think tank also recommends that the new Government prioritise the rolling out high speed broadband to rural areas; invest in an integrated, accessible and flexible rural transport network and ensure that sustainable agriculture policy, sustainable land management, and short supply chains for farmers and consumers form the basis of future agricultural policy.

SJI also calls for investment in human capital through targeted education and training programmes, especially for older workers and those in vulnerable employment.