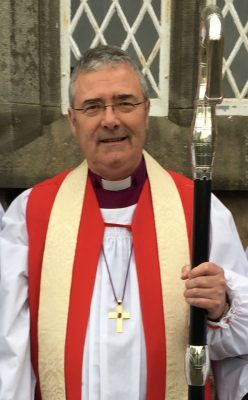 The Church of Ireland House of Bishops has elected Bishop John McDowell of Clogher as the new Archbishop of Armagh and Primate of All Ireland.

Responding to his election, Bishop McDowell said he was “overwhelmed by the confidence which my fellow bishops have placed in me to fill this ancient office”.

“I look forward to working with them in the time to come and to serving the people of the Diocese of Armagh and the Church of Ireland in whatever way I can.”

His translation will take effect from Tuesday, 28 April; however, the date of Bishop McDowell’s enthronement has yet to be announced.

Upon taking up his responsibilities as Archbishop of Armagh, Bishop McDowell will be the 106th in the succession of abbots, bishops and archbishops of Armagh since St Patrick.

He has also served as an Honorary Secretary of the General Synod (2008-2011) and is currently Chairman of the Church of Ireland’s Commission for Christian Unity and Dialogue.

In a statement, Archbishop Eamon Martin of Armagh said he was “delighted with the news” and sent Bishop McDowell his “sincere congratulations and assurance of my prayers” as well as “God’s blessing as he begins a new chapter in his ministry”.

Archbishop Martin has known Bishop McDowell for several years and has already worked closely with him in his previous role as President of the Irish Council of Churches.

“Bishop John also joined me on a cross-community centenary pilgrimage with young people to the Somme and other significant First World War sites back in 2016.”

“I very much look forward to working with Bishop John in the months and years ahead. His predecessor Archbishop Richard Clarke and I had a very positive working relationship and we often remarked that, even though there are two St Patrick’s Cathedrals in Armagh, there is only one St Patrick!” Dr Martin said.

“I hope that Bishop John and I can nurture a similar, shared mission in proclaiming the joy of the Gospel as brothers and friends. Here in the parish and diocese we shall pray for him in the coming days, and especially over the Feast of St Patrick.”

In the diocese of Clogher, Bishop Larry Duffy responded the news about his Church of Ireland counterpart saying he had been “privileged to work with Bishop John, as fellow Christians and as leaders of our respective Church communities” since his own election.

“Since 2011 Bishop John has given outstanding witness to the Gospel of Jesus Christ through his leadership. His authentic outreach, friendship and solidarity – all of this has been of great benefit to the communities we serve on both sides of the border over recent times,” Bishop Duffy said.

Through his role as Chair of the Council for Ecumenism of the Irish Catholic Bishops’ Conference, Bishop Duffy said he has had much contact with Bishop John through his work with the Irish Inter-Church Meeting, of which he was chair for many years.

“I know that he will bring the same spirit of Christian love, dedication and outreach as the leader of the Church of Ireland throughout our island.”

He assured Bishop McDowell of the diocese of Clogher’s and his own prayers and continued friendship and support into the future.

The Rt Revd Francis John McDowell grew up in Belfast and pursued a career in business prior to training for ordination.

He has also served as the Church of Ireland’s contact person for the Porvoo Communion (2007-2013) – a communion of Anglican and Lutheran Churches in Europe which share a common life in mission and service.

He was elected Bishop of Clogher in May 2011 and consecrated as bishop in St Macartin’s Cathedral, Enniskillen, in September of that year.

Bishop McDowell holds a BA (Hons) in History from Queen’s University Belfast (1978), a Diploma in Business Studies from the London School of Economics (1984), and a BTh in Theology and Biblical Studies from Trinity College Dublin (1996).

He is married to Mary, who teaches in Enniskillen Royal Grammar School, and they have one daughter, Dorothy, a student at Oxford University.