Bishop McAreavey resumes duties in the diocese of Dromore 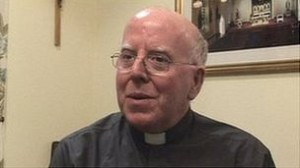 Bishop John McAreavey has announced the full resumption of his pastoral duties as bishop of Dromore following his six-month sabbatical.

In a statement issued on Thursday, Bishop McAreavey said he was “delighted” to be back in Ireland and in Dromore.

He said the sabbatical had “refreshed” him physically, emotionally and spiritually.  “I have not come back with any ready-made solutions to the difficulties that confront the Church in Ireland or Dromore. However, I feel better equipped to face them,” he said.

He outlined what he had done during his sabbatical which began in February and ended a few weeks ago.

“When I made my announcement in November 2012 about taking a sabbatical, I spoke of my intention to spend time in the Holy Land. In the event, I spent nearly three months there. I am indebted to the Benedictine communities in the Holy Land that made that possible: one in Abu Ghosh, an Arab town near Jerusalem, one at Tabgha on the shore of the Sea of Galilee and Dormition Abbey in Jerusalem.”

“Following the period in the Holy Land, I flew to China where I was a guest of the Columban Fathers for a month. I stayed with them in Hong Kong, Shanghai, Wuhan and Beijing. This gave me an opportunity to experience life in modern China, as well as to see at first hand the vitality of the Church and the obstacles it faces.”

He spent the final part of his sabbatical in the parish of St Bernardine of Siena in the archdiocese of Los Angeles.  “There I was able to experience the demands and energy of a parish in USA,” he said.

Bishop McAreavey returned to Ireland at the end of July and has been preparing for the challenges coming up for the diocese of Dromore and the Irish Church in general.

Among the pastoral challenges he has identified for Dromore is the support and care of the priests in the diocese who carry heavy pastoral burdens. “With that in mind, I plan to meet each priest of the diocese individually during the month of September.”

Referring to a special two-day conference in Drumalis in October 2012 attended by the priests of the diocese, Bishop McAreavey said that at that meeting they had taken stock of the personnel resources of the diocese and the major pastoral needs facing it.

“We identified three major issues of concern: (i) the on-going sharing of ministry between our priests and people at parish level; (ii) adult faith development of our parishioners; and (iii) the pastoral care of the sick in our hospitals.”

He signalled his determination to continue to work with priests and people to address these priorities.

The Bishop concluded his statement by saying the opportunity to take time off on sabbatical had been “an important grace” for him.

“I see it now as the beginning of a new phase of my ministry as bishop.  I ask the faithful to join with me in prayer so that it will prove to be not only a grace for me personally, but also for the whole diocese,” he said.