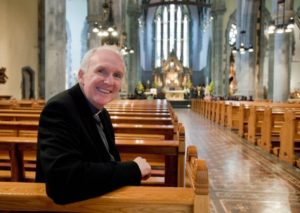 The Bishop of Limerick has warned that “asylum seekers are living in dire circumstances” in his diocese as he appealed for migrants to be allowed to participate fully in Irish society.

Addressing the congregation at Raheen parish in Limerick in his New Year’s ‘World Day of Peace’ homily, Bishop Brendan Leahy warned the faithful to be particularly vigilant to avoid exploitation of women and children.

He said Pope Francis’ message for World Day of Peace on the theme of migrants and refugees, titled ‘Migrants and Refugees: Men and Women Seeking Peace’ comes as a pressing invitation.

The Pope reminds the faithful that there are over 250 million migrants worldwide, of whom 22.5 million are refugees.

“In Ireland we have a particular sensitivity to the theme of migration, emigration,” Dr Leahy said.

“We need to do all we can to welcome migrants,” he continued.

“In Ireland we need to support the human development of migrants and refugees, ensuring access to all levels of education for children and young people. This will enable them not only to cultivate and realise their potential, but also equip them better in their turn to go out and encounter others in a spirit of dialogue rather than confrontation.

“To welcome migrants means we also need to know how to allow them participate fully in our society. It is to the benefit of us all.”

In Limerick, he said, there are a number of “excellent vehicles for supporting migrants and refugees but in some respects, not least in terms of living conditions, we are not living up to our obligation to support asylum seekers.”

He paid tribute to the work of Limerick Social Services Council, which was set up by Limerick Diocese, and offers support to migrants.

“There are others who also do good work, such as Doras. Our schools do great work in welcoming, protecting, promoting and integrating. But we can’t deny there are many migrants and refugees among us looking for homes, friendship, help.” 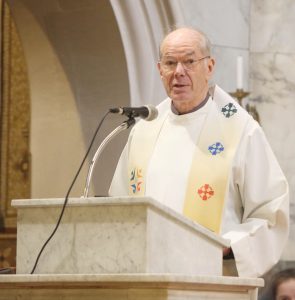 In Dublin, Mgr Lorcan O’Brien, Administrator of the Church of the Sacred Heart in Donnybrook, also spoke about the plight of migrants and refugees in his homily.

The storms of life, armed conflicts, wars, genocides, ethnic cleansings, natural disasters, environmental degradation, famine, poverty, economic crises and the absence of opportunity, all generate movements of people across the world, driven by desperation and by hopelessness, he told the congregation.

He recalled the words of Peter Sutherland, who has advocated for the rights of migrants and refugees, and is a member of Donnybrook parish, and named migration as “the morally, politically and economically defining issue of the 21st century”.

Mgr O’Brien also highlighted how homelessness has been an issue in Ireland in particular since recovery from the economic crash began.

Every human person, whether migrant, refugee, homeless or not, is a beloved daughter and son of God the Father of Jesus. God in Christ has become one of us and in becoming one of us has vindicated the equal value of every individual in the gaze of God and our equality as persons, he said.

“We live and express our humanity in co-operating together in making our shared world a home for everyone. Home has been described as the place where dreams are sheltered and given space to grow, where everyone has a place at the table, where difference is strength and where we hold things together against the odds.”

In order to express their dignity as persons, migrants and refugees require protection, welcome, the promotion of their integral human development and the opportunity to participate in the life of the society that welcomes them.

“When we as a community provide this opportunity we enhance the integrity of our own humanity. When we fail to do so, we ourselves are diminished and peace is threatened,” he warned.

As an Irish citizen, Mgr O’Brien said he felt embarrassed when he hears “our political leaders pledging to seek pathways for the regularisation of undocumented Irish citizens in the USA when I hear nothing about regularising the many undocumented people here in Ireland.”

In Cork, Bishop John Buckley celebrated Mass for the World Day of Peace at St Francis Church. The ceremony was attended by the Lord Mayor, civic dignitaries and representatives of the Gardaí and the Defence Forces.

In his homily, Bishop Buckley said that World Day of Peace this year is shadowed by the terrorist atrocities in English and European cities – London, Manchester, Paris, Barcelona, Brussels and many more during 2017.

People throughout the world, he said, feel a vulnerability and a fear for the future in the light of these events. Terrorism, which is a crime against humanity, is built on a contempt for human life.

“We must pray to the Lord, he said, to change the hearts of those who commit such crimes. Thankfully, in Northern Ireland people have realised the futility of violence as a means to resolve differences and have realised that violence destroys the fabric of society.

“True peace starts with justice. As long as injustice exists, true peace will not exist. Every human person has a right to housing, education and food. Without these, one cannot live a human way of life not to mention a Christian way of life.

“The good things of the world are given to us for the benefit of all and should be shared and not concentrated in the hands of a few. This is the deepest truth of the gospel. It is amazing that the eight richest people in the world own the same amount of wealth as the poorest half of the world.”

Bishop Buckley prayed for peace in homes, countries and in the world, and for an increased awareness of the need to work for justice as a means to achieving lasting peace.