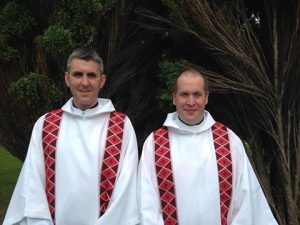 Bishop Seamus Freeman of Ossory ordained two members of the Pallottine community in Ireland to the diaconate over the Bank Holiday weekend.

Rev Charles Lafferty from Co Derry and Liam O’Donovan from Co Kilkenny were joined by members of the Pallottine community in Dundrum and family and friends for the occasion.

Bishop Freeman is a former rector general of the Pallottine Order.

In an interview with the Irish Catholic newspaper earlier this year, Fr Emmet O’Hara, Pallottine vocations director commented, “It is a really positive year and there is great elation. I think students attract students, because they see there is life and hope here.”

Rev McCarrick and Rev Twohig have in the past highlighted how both Youth 2000 and Medjugorje played a part in their vocation stories.

Brendan McCarrick first contemplated his future direction as he prepared for his mock Junior Cert in February 1993.

He later went to college and studied engineering but applied at 20 to study for the priesthood. For three years he struggled with his studies in the seminary before realising that he was in the wrong place.

“I was lonely and alone in a seminary, in a class of over twenty lads, and over one hundred and seventy lads studying for diocesan priesthood.”

A life changing event happened in 2008, when Brendan travelled to Australia for World Youth Day, where his faith was reinvigorated. 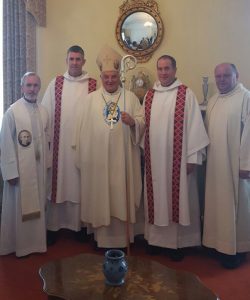 “It was there I decided, during my time in prayer that God was still calling me to priesthood, the only decision was where? A return to diocesan priesthood or community/religious life?”

While attending a Youth 2000 event, he met the vocations director of the Pallottines, and he invited Brendan to a weekend retreat in Thurles, where he could learn more about the Pallottines, St Vincent Pallotti the founder of the Society and about where God was guiding him in his life.

Rev Jaimie Twohig went to Medjugorje in 2005 where he had “a very powerful experience one night at a prayer meeting”.

“It is very hard to put it in to words but to put it simply I knew that God loved me completely. I can’t describe the peace and the joy I felt. The feeling of emptiness inside of me was gone. This experience changed my life forever.”

He decided to do something about the call he was feeling in my heart in late 2008. “I didn’t feel called to diocesan priesthood so I knew that a community life was the way to go.”

In early 2009, he was invited to a Pallottine vocations weekend by Fr Emmet O’Hara.

Separately, a series of listening sessions have taken place with young people in the Diocese of Ossory on how best to promote vocations to the priesthood.

The listening process was undertaken by Fr Willie Purcell, the National Coordinator for Diocesan Vocations.

Different groups of young people met to share their ideas, views and proposals for how best to promote the image of priesthood.

The groups consisted of youth pilgrimage groups, school groups, Pope John Paul II Award groups and a discernment group that is currently reflecting on vocations to the priesthood.

“There was no fixed agenda at the meetings”, according to Fr Purcell and “the floor was open to hear what young people had to say. The aim of the meeting was to get some feedback from young people about how we might begin to create a culture of vocations amongst young people.”

The three key areas of possibility which arose in the listening sessions were:

One major question from the various listening sessions was ‘What does a priest do?’ Participants knew that a priest celebrates Mass and says his prayers but they were curious to find out what else the priest does.

The young people in the listening sessions shared a strong admiration for the ministry of the priest and the various ministries within the call to priesthood.

They were amazed when they learned all the tasks a priest has on an average day. They were surprised to know that there are not just priests in parishes and school chaplains but also prison chaplains, hospital chaplains, university chaplains, that priests visit primary schools, take care of the sick and elderly, work with young people at different levels and are always available to people young and older.