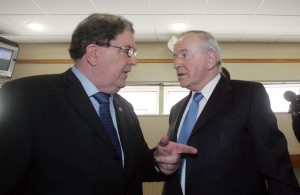 Church leaders have been among the many political and state leaders as well as members of the public who have paid tribute to the former Taoiseach Albert Reynolds who died at the age of 81 on Thursday.

The Bishop of Elphin, Dr Kevin Doran said in a statement that Mr Reynolds would be best remembered for his refusal to accept that there was no alternative to violence in Northern Ireland.

In a statement, Bishop Doran also paid tribute to Mr Reynolds’ “courage and initiative and, above all, his openness to dialogue” which he said “laid the foundations for the peace which we enjoy today”.

“No society can afford to take peace for granted and we can most fittingly honour Mr Reynolds by continuing to give attention to the demands of social justice, participation and inclusion, all of which serve the common good and underpin the kind of peace to which we aspire for ourselves and our children,” the Bishop said.

The new Bishop of Elphin said that a national leader of the stature of Albert Reynolds “belongs to the whole nation, but he has a particular association with the diocese of Elphin, having been born in Rooskey, Co Roscommon and having studied for five years at Summerhill Diocesan College in Sligo.”

He also referred to the personal contact he had with the late Fianna Fáil politician and his wife Kathleen as parishioners of his in Donnybrook in Dublin, although Mr Reynolds had been unable for some years to attend Mass there, due to declining health.

Bishop Doran extended his personal sympathies and the promise of his prayers to Albert Reynolds’s wife Kathleen and to their family.

He said he joined with people all over Ireland in giving thanks to God for the gifts received through the political life of Albert Reynolds.

Bishop Francis Duffy of the diocese of Kilmore also paid tribute to the late Mr Reynolds and extended his sympathies to the family of the late TD for Longford/Westmeath.

In his statement, Bishop Duffy said Albert Reynolds “will be remembered locally as a committed and sensitive politician who made a real difference to the lives of his constituents in our community and economy.”

He said that as a talented politician, Mr Reynolds played a significant role in the political life of this country.

“Nationally and internationally he will be remembered as a major player in bringing peace to this island. This achievement was embodied in the Downing Street Declaration of December 1993, which paved the way for the first IRA ceasefire of 31 August 1994,” Bishop Duffy said.

He added that this success was a shining example of commitment to the common good and dedication to the long sought and precious goal of securing peace in Ireland.

Bishop Duffy concluded his statement by expressing his prayerful sympathy to Albert Reynolds’ wife Kathleen and their two sons and five daughters.

The Church of Ireland Archbishop of Dublin, Dr Michael Jackson, also expressed his sympathy to all the members of the Reynolds family.

In his statement, Archbishop Jackson acknowledged the “courageous and creative work Mr Reynolds did in enabling peace to come about in Ireland.”

“I particularly recall the twentieth anniversary of the Downing Street Agreement and the subsequent IRA-loyalist ceasefires.”

He added, “We ought to recognise the contribution made by those who caught the vision of peace across the island of Ireland and gave of themselves to make it a living reality,” the Church of Ireland leader said.

Arrangements for the State funeral of the former Taoiseach have been announced.

On Saturday 23 August, Mr Reynolds will lie in repose in the Oak Room, Mansion House, in Dublin from 1-6pm. Members of the public will have an opportunity to file past the coffin and pay their respects to the late Mr Reynolds and sign a book of condolences.

The funeral of Mr Reynolds will take place on Monday 25 August in the Sacred Heart Church, Donnybrook, Co Dublin at 12pm.

There is will be limited seating available for the public. However, the Mass will be relayed outside the church.

This will be followed by the burial in Shanganagh Cemetery in Shankill, Co Dublin.

There is an online book of condolence available on Department of Taoiseach website.

Members of the public will also be able to sign a book of condolences at Fianna Fáil party’s headquarters at 65-66 Lower Mount Street, Dublin 2 from 9am tomorrow morning. The book will remain open until 5pm.