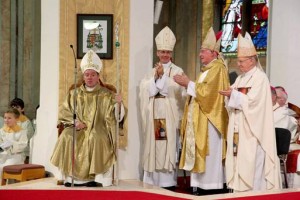 The Irish Church’s newest bishop was ordained Bishop of Ardagh & Clonmacnois at Mass in St Mary’s Pro Cathedral in Athlone on Sunday afternoon.

Cardinal Sean Brady, Archbishop of Armagh and Primate of All Ireland, was the principal ordaining bishop at the ceremony which saw 53-year-old Bishop Francis Duffy join the ranks of the Irish episcopacy.

In his address following his ordination, Bishop Duffy explained why he had chosen the motto ‘I have come that they may have life’.

“I chose it because each human life is so important. In thinking of life we inevitably think of those who matter to us. Ordinary daily life, around the kitchen table, at work, at recreation, with all its joys, pressures and possibilities, is where our faith and on-going relationship with Jesus Christ can bring the glow of hope that can transform our actions and our living.”

Noting that Sunday was the day which marked the Church’s annual ‘Day for Life’ and that this year’s theme was ‘Care for Life: It’s Worth It’, he said “This is a pastoral letter to the faithful of Ireland from our bishops. It holds up the vision that no person should ever be marginalised or set aside,” he said.

“When I think of life I think of the great ability we can have to lift hearts and especially the hearts of those who are in dark places, maybe facing difficult choices or feeling abandoned, alone or of little worth or struggling financially, as many are.”

He added, “I think of those whose passion for life and whose sensitivity to others conveys the message that life is worth living, the message of Jesus Christ.”

Bishop Duffy said he also shared the country’s shock and revulsion over the alleged attacks on “two innocent children” in Athlone last weekend. “My prayer today is for the young victims, their families and local communities,” he said.

He thanked Cardinal Sean Brady as “a fellow Cavan man, and formerly a priest and teacher of the Diocese of Kilmore” for his “leadership and for his gentle and thoughtful support.”

Referring to St Mel’s Cathedral, Bishop Duffy said that last Sunday over to 5,000 people had visited the cathedral and the mood was “upbeat and hopeful because progress was visible and a restoration in sight.”

He added, “The plans for the future are in good hands with Bishop Colm and the Restoration Project Committee and we all look forward to the reopening at the end of next year.”

In his homily, Fr Tomas Flynn, a classmate of Bishop Duffy’s and the parish priest of Kiltubrid noted that the celebration was taking place in the Year of Faith, which is also the Year of the Gathering, and he said these themes of faith and gathering “run like threads through this ordination ceremony.”

“We gather together in the timeless relationship we call faith. It’s a day that doesn’t stand alone. The past is the key to the future, and, so, from the heart of the moment we remember with gratitude, gather in, and allow to come close, the generations gone before us, who remained faithful guardians of the flame, first lit by Patrick on the Hill of Slane, and carried to these parts by Mel, Ciarán and Felim.”

He added, “Through famine and persecution these, our people, from Banagher to Ballintogher, from Teemore to Templeport, kept a promise, and bequeathed to us a priceless spiritual heritage.”

Acknowledging that the Church is at a challenging moment in its history, he said it was “a moment when we have moved from a position, of comfort to discomfort, of certainty to uncertainty, of security to insecurity.”

As we survey the landscape of our time we can identify with the perception of Pope Emeritus Benedict that ‘the faith in Europe has grown tired’. We could even feel disheartened by the sense of ‘untroubled irreligion’ and increasing ‘ecclesiastical emigration’ that surrounds us, by the awareness of the throngs who no longer walk with us, who claim to believe but not belong.

He said some may even be tempted to wish that they were called to the vineyard at a seemingly more favourable and secure time. But he said the journey of faith “was never a smooth one from the moment when Abraham stepped out into an uncertain night to follow an uncharted road.”

The voyage of faith is, and has always been a search rather than an arrival, a trust rather than a certainty, a search to discover the print of His hand in the people, places, smiles, tears of those encountered on the road.

Many reasons can be advanced for the weakening of the light of faith in this generation, but somewhere in the mists of recent times we have failed to tell the story, our story, which is the story of Emmanuel, God in the midst of His people, the story of the marvellous, the greatest story ever told, and when our story gets lost other less worthy stories take its place.

It is the urgent task of the keepers of the flame to tell the story anew, because, beneath the veneer of ‘untroubled irreligion’ there lies a deep yearning for meaning, he said.