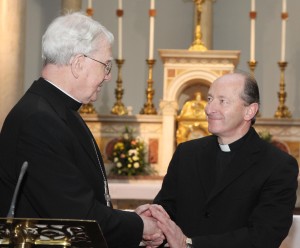 The new Bishop of Waterford & Lismore has said he has been “much encouraged by the words and example of that wonderful young man Donal Walsh” – the Kerry teenager who died of cancer last year.

Speaking at the Cathedral of the Most Holy Trinity in Waterford City on Monday, Fr Alphonsus Cullinan told the assembled well-wishers that if Donal Walsh were here he’d probably say, “Look, keep climbing the mountain because it’s God’s mountain –and God is asking you to keep climbing”.

The bishop-elect added, “On my own I won’t get very far, but together, people and religious and with my brother priests and Bishop Willie, we will do great things for God.”

He succeeds Bishop William Lee who retired on health grounds in October 2013.

In his statement, Fr Cullinan referred to Waterford city and the diocese’s ancient histories, recalling its Christian heritage goes back to the earliest days of Christianity on this island of Ireland.

The Limerick priest said he was very proud to be called to do something to continue that wonderful tradition.

He continued, “I don’t have any illusions about the difficulties of the job which I have been given and I know my own unworthiness and limitations.” 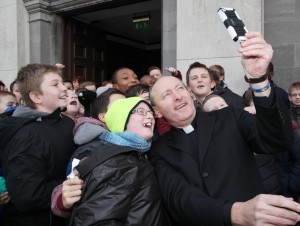 “In that sense I have a mountain to climb but mountains are made for climbing!”

He also underlined that he was not the only one with a mountain to climb.

“There are so many people with troubles of their own – illness, loss, worry about children, about making ends meet, depression, loneliness, lack of meaning in life, being marginalised, – the list of human suffering and pain is long.”

He said Jesus came, not to add a further complication to life, but to set us free – to bring us his grace, help, wisdom and his peace and joy.

“He knows us and what it is to live a human life. He himself worked as a carpenter, working with his hands in the carpenter’s workshop. He is human like us.”

Fr Cullinan was born in Lahinch, Co Clare in 1959 to Christy and Rita and has four sisters and five brothers.

His family moved to Limerick city where he attended the Salesians for early education, John F Kennedy National School and the Crescent College Comprehensive (SJ) for his secondary education.

From 1978-1981 he attended Mary Immaculate College of Education in Limerick and qualified as a primary school teacher (BEd) in 1981, and taught for six years in Castleconnell, Co Limerick.

He worked part-time during that time for four years with the Bunratty Castle Entertainers before going to Spain where he taught English for two years in a school in Valladolid.

Fr Cullinan studied at St Patrick’s College Maynooth from 1989-95 where he completed an STL (Licentiate in Theology).

He was ordained by Bishop Jeremiah Newman in 1994 in St John’s Cathedral, Limerick, and appointed curate in St Munchin’s parish Limerick city 1995-1996.

His next appointment was as chaplain to the Regional Hospital in Limerick from 1996 until 2001.

He studied for his doctorate in moral theology in the Alfonsianum in Rome 2001-2004 and then was appointed chaplain to the Limerick Institute of Technology 2004-2011.

Fr Cullinan has been working as parish priest of Rathkeale, Co Limerick since 2011.

Welcoming the news of the appointment of his successor, Bishop Lee said that the new bishop would find dedicated priests, committed religious and enthusiastic lay men and women, young and not so young, in the diocese “who greet you warmly today and who are eager to be your co-workers in the vineyard of the Lord”.

The Primate of All Ireland, Archbishop Eamon Martin, said the news marked “a day of new beginnings” for Fr Alphonsus.

Archbishop Martin added, “As a priest who is already well used to being out among his people, Fr Alphonsus will have so much to offer as a bishop.”

Waterford & Lismore includes Co Waterford, and part of Counties Tipperary and Cork. There are 85 churches across 45 parishes catering for a catholic population of 152,107.