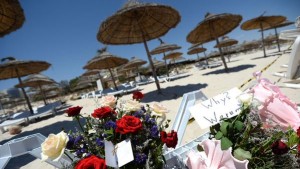 Bishop Kevin Doran of Elphin and Bishop Michael Smith of Meath on Sunday extended their condolences to the families and friends of the three Irish people killed in the Tunisian beach massacre.

The terrorist attack at the coastal resort of Sousse left 38 people dead, 30 of whom were British.

The three Irish victims were Lorna Carty from Robinstown, close to Navan in Co Meath, and husband and wife Larry and Martina Hayes from Athlone, Co Westmeath.

In his statement on Sunday Bishop Doran said, “The unprovoked killing of a husband and wife, who wanted nothing more than to relax together for a few weeks in the sun, is another reminder of how much unresolved anger there is in our world.”

He paid tribute to Larry and Martina Hayes, who were parishioners of the diocese, and who were “among those whose lives were stolen from them in a mindless act of violence in Tunisia last week”.

The Bishop of Elphin offered his deepest sympathies and prayers to their daughter, their extended family and their neighbours and friends in the South Roscommon area around Athlone.

“To suggest that such violent acts can in any way be justified by religious belief, whether Christian or Islamic, is totally false. The one God in whom both Christians and Muslims believe is a God of peace,” he said.

Dr Doran said it was particularly sad to learn of the news about the death of the Hayes couple on a day when the diocese was celebrating the jubilees of married couples.

“May they, who have had their joy on earth taken from them, enjoy peace and happiness for all eternity in the Kingdom of Heaven,” he prayed.

The couple, who were in their 50s, have one daughter. Mr Hayes was a school bus inspector with Bus Éireann and had worked at the company for 20 years.

Separately, Bishop Michael Smith of Meath extended his sympathy and prayers to the family of Lorna Carty on Sunday afternoon.

Presiding at the ordination of Fr Robert McGivney (28) in St Mary’s Church in Navan, Co Meath, the Bishop said, “Today is a supremely important moment in Robert’s life and a happy occasion for the Diocese of Meath. Yet our thoughts are also with the Carty family in Robinstown following Lorna’s senseless killing.”

Bishop Smith acknowledged the widespread grief and sadness in the locality. He recalled that Lorna had worked in Navan in one of the medical centres and was “known to, and loved by, very many people”.

“The brutal circumstances of Lorna’s death are sadly becoming more frequent,” he said and added that this was the world in which Fr Robert was called to serve as a priest.

“Ordination includes bringing comfort to the suffering and being a minister of Christ’s peace in a difficult world, Dr Smith said as he extended sympathy and our prayers to Lorna Carty’s husband Declan, to her children Simon and Hazel, and extended family and friends.

In a statement, the Minister for Foreign Affairs, Charlie Flanagan said he condemned “unreservedly the terrorist attacks in Tunisia, Kuwait and France”.

“I also want to offer my sympathy and my condolences to the Governments and peoples of Tunisia, Kuwait and France but, above all, to those directly affected. Dozens of people have been killed in these brutal attacks. Attacks like these sow fear and prompt revulsion, but they advance no political cause,” Minister Flanagan said.

“Such attacks must be condemned wherever they occur but happening in Europe and on Europe’s doorstep brings their full horror home to us here in Ireland. We must continue to work together for the stability of the Middle East and North Africa, and to address the threats to the people of Europe and the region presented by continued instability.”

Offering his “heartfelt condolences” to the family and loved ones of the deceased, the Minister urged Irish citizens “in light of this incident” to ‘exercise extreme caution’.

“Irish citizens in Tunisia should remain extremely vigilant and follow the instructions of the police, tour operators, and their hotel staff,” he urged.