There is something irrepressible about the human spirit that saw the rebuilding of Irish churches devastated by fire, including St Mel’s Cathedral in Longford, and already in France talk about the restoration of Notre Dame, Bishop Kevin Doran, Diocese of Elphin, has stated. 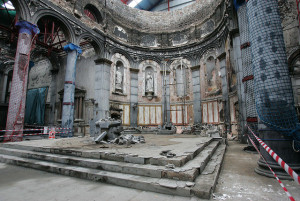 St Mel’s Cathedral, Longford, following the fire there in 2009

He said that the destruction of St Mel’s Cathedral in 2009 touched many, as did the fire in Paris, where the people expressed shock, disbelief and real sadness about the devastation.

“It is good that we look after our churches, because they are the visible sign of our faith in Jesus Christ. But there is more to our faith than church buildings. Indeed there was a time when our ancestors did not have the blessing of beautiful churches but, as they gathered around the Mass-rocks, their faith remained strong,” said Bishop Doran.

Referring to St Peter’s letters (1 Pet. 2:5) to the first Christians about being like “living stones” built into a spiritual house, he said: “Today, we are called to be those ‘living stones’ and to become a home for God.”

St Francis of Assisi took God’s call literally by rebuilding San Damiano church with some of his friends, but he came to realise that he should build up the faith of God’s people, who are the Church, stated Bishop Doran.

“Ultimately, we are the Church; we are the house that God wants to rebuild. It is in our lives, individually and collectively, that the Resurrection takes place,” said Bishop Doran, speaking at the Easter Vigil on 20 April 2019 in the Cathedral of the Immaculate Conception, Sligo.

The 175-year-old landmark St Mel’s Cathedral in Longford went up in flames on Christmas Day 2009, only hours after hundreds of parishioners had attended Midnight Mass. The cathedral was severely damaged, with many priceless items destroyed, including the tenth-century crozier of St Mel, and delicate tapestries and paintings. The building lost marble fittings, and the roof and wooden floor sank into the crypt. In 2014, just five years after the fire and following a €30m restoration, the cathedral reopened in time for Christmas.

The Irish Independent has reported that former parish priest Fr Tom Healy, who was seen by many on TV reports about the fire at St Mel’s, said he was deeply saddened when he watched the Notre Dame fire.

He said that in the same way that St Mel’s matters to the people of Longford: “I know Notre-Dame has a massive place in the heart of France.” He added that Notre-Dame will rise again. “There is hope,” he said.

France will invite architects from around the world to submit designs for restoring the Notre Dame cathedral within five years in time for the Olympic Games in 2024 in Paris. Pledges of donations continue to pour in. One came from the Pinault family, associated with brands including Gucci and Yves Saint Laurent and another from Bernard Arnault, associated with cosmetics giant L’Oreal. Both are reported to have pledged at least €100 million each, while US tech giant Apple has pledged an unspecified sum.

It was taken as a good sign for the more than 800-year-old cathedral when the copper rooster that topped its spire was found in the rubble. The walls, bell towers and the most famous circular stained-glass windows at France’s most visited tourist attraction also remain intact. The floor of the nave was left covered in rubble and the remains of scorched beams from the wooden roof.