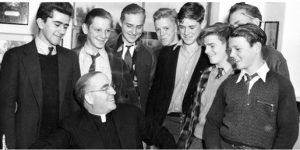 Bishop Kevin Doran has paid tribute to the “courage” of Fr Edward Flanagan, founder of Boys Town, who he said was ready to risk his own reputation in order to care for those in need on the streets in Omaha.

2017 marks the centenary of the founding of Boys Town in Nebraska by the Ballymoe native.

Fr Flanagan was made famous by the 1938 Spencer Tracy movie Boys Town.

The priest strongly condemned Ireland’s industrial schools in the 1940s and spoke out against the way children born outside marriage were treated.

When he returned to America after his visit to Ireland in 1946, Fr Flanagan said he was appalled by what he saw and the abuse of children in institutions.

Addressing the Irish priests and political leaders he said, “What you need over there is to have someone shake you lose from your smugness and satisfaction and set an example by punishing those who are guilty of cruelty, ignorance, and neglect of their duties in high places … I wonder what God’s judgement will be with reference to those who hold the deposit of faith and who fail in their God-given stewardship of little children.”

In an interview published on the Diocese of Elphin’s Facebook page, Bishop Kevin Doran paid tribute to Fr Flanagan’s “courage in recognising that something needed to be done and going out and beginning to do it in spite of the fact that he met with opposition”.

Dr Doran said that most people who perform a prophetic mission in the Church meet with opposition, and not everybody continues because they are sometimes afraid of the consequences.

Fr Flanagan was born on 13 July 1886 near Leabeg in Co. Roscommon to John and Honoria Flanagan. In 1904 he emigrated to the United States and became a US citizen in 1919.

He was ordained a priest in 1912 and in 1917 he was living and working in Omaha, Nebraska, when he decided to set up ‘Boys Town’, offering education and a home to the poor boys of Omaha.

The demand for this service was so great that he soon had to find bigger premises. Boys Town was then built on a farm ten miles from Omaha.

Fr Flanagan insisted that there would be no fences to stop the boys from leaving Boys Town. He said he was “not building a prison” but “a home”. 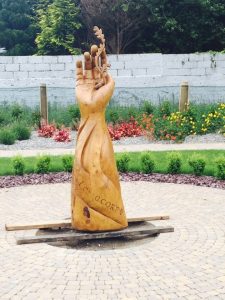 Last week a specially commissioned piece of sculpture was installed in the Fr Flanagan Memorial Garden beside St Croan’s Church in Ballymoe to honour this centenary year.

The unique wooden sculpture, made from American cedar wood and hand-crafted in Ireland, stands over two metres high and takes the form of an open hand cradling two acorns with an oak sapling.

It is inscribed with the words “From little acorns …” The words spiral away to signify the journey of life that we all take once we are guided in the right direction, which is what Fr Flanagan did for countless children, and what Boys Town continues to do to this day.

Meanwhile, efforts to have Fr Flanagan canonised have taken a step forward following the Vatican’s issuing of a decree of judicial validity for the investigation that the Archdiocese of Omaha completed two years ago.

The archdiocese investigation looked at the life, virtue and works of the Boys Town founder.

A decree of validity means the investigation was thorough, complete and proved that Flanagan had a reputation for sanctity.

The next step is for the Vatican to appoint a person to draw examples of heroic virtue from the archdiocesan investigation. That would pave the way for the pope to declare Flanagan venerable. After that comes beatification and canonisation.

In 1946 Fr Flanagan’s visit was covered by the Irish Independent, which said that the Irish priest had succeeded “against overwhelming odds”, spurred on by the “simple slogan that ‘There is no such thing as a bad boy.’”

Fr Flanagan was dismayed at the state of Ireland’s reform schools and blasted them as “a scandal, un-Christ-like, and wrong”. He said the Christian Brothers, founded by Edmund Rice, had lost their way.

Speaking to a large audience at a public lecture in Cork’s Savoy Cinema he said, “You are the people who permit your children and the children of your communities to go into these institutions of punishment. You can do something about it.”

He called Ireland’s penal institutions “a disgrace to the nation”, and later said “I do not believe that a child can be reformed by lock and key and bars, or that fear can ever develop a child’s character.”