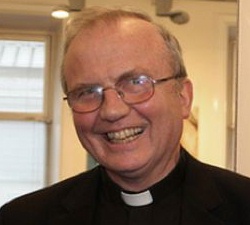 World Youth Day will provide many of the young Irish pilgrims travelling to Rio a chance to experience some of the “huge work” done by Irish missionaries Bishop Donal McKeown has said.

Speaking ahead of his departure on Monday for the Brazilian city, Bishop McKeown said the faith gathering in South America would also provide the “idealistic young of our world” a unique opportunity to gather around Pope Francis and “celebrate the Gospel message of hope in the midst of our world.”

The Bishop, who is Chair of the Bishops’ National Committee of Diocesan Youth Directors, will join 170 pilgrims from Ireland who are travelling to WYD in the coming days. Archbishop Diarmuid Martin Archbishop of Dublin and Bishop Denis Brennan of Ferns are also taking part.

Over two million people are expected to attend WYD Rio2013, the theme of which is “Go and make disciples of all nations” (Mt 28:19).

It takes place from 23-28 July in Rio de Janeiro in Brazil, the world’s largest Catholic country.

Pope Francis will undertake his first international pilgrimage as Pontiff in order to attend it. He is due to visit some of the city’s disadvantaged and meet young prisoners while there.

“Rio promises to be a very exciting World Youth Day. It is providential that a Latin American country will welcome the first Pope from their continent,” Bishop McKeown commented at Dublin Airport.

He added that it takes place at a time when Brazil is facing into the reality of economic and social inequalities.

The Irish pilgrims will represent the archdioceses of Armagh and Dublin, and dioceses such as Ferns and Clogher as well as Trócaire.

During WYD Rio2013 pilgrims will attend churches, halls, gymnasiums and auditoriums which have been reserved for catechesis. Over the week, 273 liturgical events will be held in ten different regions of the massive city.

To coincide with WYD Rio2013 dioceses in Ireland are preparing special gatherings and events. These include a special two-day event over the weekend of 27 and 28 July called ‘Rio in Dublin’.

This is aimed at young people who have either attended a World Youth Day or would like to savour some of the atmosphere of what takes place at World Youth Day.

– Pilgrim walks to Church Street from seven locations in Dublin.

– Young participants will be welcomed by members of the local Brazilian community in Dublin.

– Video links to Rio for some of the key ceremonies involving Pope Francis.

– A programme of catechesis, music, prayer from late Saturday through to Sunday.

There will be an opportunity to participate in a justice programme in advance of Rio in Dublin which is hosted by Magis Ireland.

Meanwhile, some Irish pilgrims are travelling to a youth festival in Kent in the UK from 26 to 29 July, where 16 to 25 year olds can experience a flavour of WYD Rio 2013.

Brightlights 2013 will take place over the World Youth Day weekend in the grounds of Aylesford Priory, home to the Carmelite community.

The weekend festival will have a Rio carnival atmosphere, a large screen link up with WYD in Rio, live bands, catechesis, guest speakers and liturgies.