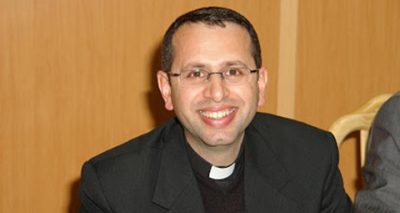 On Good Shepherd Sunday, Bishop Cullinan recalled how the young priest, who was a fellow student and friend of his at the Irish College in Rome, had given “his blood for his flock”.

“We were students together in Rome. Ragheed was joyful, clever, hard-working, he spoke several languages, including a few words of Irish.”

Referring to the Gospel about the Good Shepherd, Dr Cullinan said it reminded him of a homily preached by Fr Ragheed 17 years ago in Rome.

In his homily Fr Ragheed told the story of how he had spent a day with a shepherd and his sheep in his native countryside in Northern Iraq around the city of Mosul. He watched the Shepherd tend his flock; the shepherd had a name for each sheep and had specific whistle calls to get them to move on, go right, go left, stop.

Once when they were grazing, Ragheed tried to get the sheep to move by mimicking the whistle call of the shepherd, but they didn’t budge. They knew it was not their shepherd’s call.

At night the sheep went into a fold made of wood or stone or branches and the shepherd would sleep at the entrance or gate, to protect them, literally lying across the entrance.

“Ragheed learnt a lot that day about caring for sheep. It was a lesson he was to live out in a dramatic way, because just like Jesus Christ, Ragheed Ganni was to give his life for his flock.”

Bishop Cullinan recalled how following the US-led invasion of Iraq in 2003, Fr Rahgeed was faced with the choice of either staying in Rome or going back to his own country with all its dangers.

His decision was: “Iraq is where I belong. It is my place.”

He returned to Iraq and lived among his people, celebrated the sacraments, consoled families, and remained there in spite of the dangers.

“I sent him Mass stipends. He sent me photos of his bombed-out church. He said, ‘Without their pastor the flock would be lost’.”

“Then on 3 June 2007, in his parish church, he gave the body and blood of Christ to his people and then he gave his blood for his flock.”

After Mass several Islamist extremist gunmen were waiting for Fr Ragheed. He along with three deacons of the parish were all killed.

“Ragheed is a hero for me, an example, an inspiration. We all need heroes. He in turn was inspired by Jesus Christ, the Good Shepherd. Ragheed knew Jesus. Jesus knew him. Jesus asked him to live his vocation of priesthood in a particular way,” Bishop Cullinan said.

Within that general call, there is a particular call for each person – marriage, the single life, religious life or the priesthood.

Speaking about Vocations Sunday and its emphasis on vocations to the priesthood, Bishop Cullinan said, “God is calling men to the priesthood. Are we listening? Can we hear the voice of the Good Shepherd who knows us each by name, who knows where we will find a safe place, green pasture, refreshment, love, joy, peace. And who wants us to serve God’s people. It can be difficult to hear God’s voice.”

He said today’s culture is shouting at us, ‘You can do anything you like and be happy. Seek pleasure, power, success’.

“Do you really believe that? Jesus warns us about bad shepherds who will destroy the flock and run away. They don’t care about people,” the Bishop of Waterford & Lismore challenged.

He put it to some of the men in his online congregation that God might be calling some of them to follow Jesus in the priesthood.

“He is looking for men to follow him – to rescue his people, to shepherd his people, so many of whom are downcast, lonely, lost in lives of drugs, in messed-up relationships, lost without purpose. Who will tell them where to find healing and peace and mercy and love and joy? Will you?”

Speaking as a bishop, Dr Cullinan said, “I can tell you priesthood is great, not easy. O no, often tough, but great. If you want an easy life…. what good is that! Many of my heroes in life were and are priests.”

Ragheed Aziz Ganni (20 January 1972, Mosul, Iraq – 3 June 2007, Mosul) was a Chaldean Catholic priest. On 3 June 2007, Trinity Sunday, the Sunday after Pentecost, he was killed along with three subdeacons including his cousin Basman Yousef Daud, Wahid Hanna Isho, and Gassan Isam Bidawed in front of Mosul’s Holy Spirit Chaldean Church where he was parish priest.

Fr Ganni had just finished celebrating the Sunday evening Holy Qurbana (Mass). The three deacons had recently decided to accompany Fr Ganni because of threats against his life.

After Mass he was walking away from the church with the deacons when the group was stopped by armed men. One of the gunmen shouted at Fr Ganni that he had warned him to close the church and demanded to know why he didn’t do it. Fr Ganni replied asking “How can I close the house of God?”

After the gunmen demanded that the four men convert to Islam and they refused the four were shot.

Thousands of people attended the funeral of the four men in Karemlash, Iraq on June 4, 2007.

Fr Ragheed Aziz Ganni was born on 20 January 1972 in the predominantly Sunni city of Mosul, Iraq.

After completing a degree in Civil Engineering at Mosul University in 1996 and fulfilling obligatory military service under the Saddam Hussein regime, he joined the seminary in Iraq.

In 1996, Fr Ganni’s bishop sent him to Rome for further study at the Pontifical University of St Thomas Aquinas Angelicum where he completed a licentiate in ecumenical theology in 2003. He was ordained a priest in Rome on 13 October 2001 at the Pontifical Urbaniana University.

During his study in Rome he resided at the Pontifical Irish College where he played soccer for the College. The annual showcase 5-a-side tournament played in May among the Scots, English, Beda and Irish Colleges has been named the ‘Ragheed Cup’ in his memory.

Fr Ganni celebrated his first Mass in the Chapel at the Irish College. Today Fr Ganni is one of the nine figures represented in the apse of that chapel where the relics of St Oliver Plunkett rest in the altar wrapped in the priestly stole of Fr Ganni.

Fr Ganni regularly offered Mass for the Lay Centre at Foyer Unitas which was at the time housed on the grounds of the Irish College.

Fluent in Aramaic, Arabic, Italian, French, and English, Fr Ganni served as a correspondent for the international agency Asia News of the Pontifical Institute for Foreign Missions.

Fr Ganni was finishing his degree in Rome when the Iraq war broke out. He had received permission from his bishop to return to the Angelicum in Rome to work on a doctorate in ecumenism.

In a pre-war interview he expressed his opposition to the invasion of Iraq fearing that Iraqi Christians would be targeted and persecuted. He looked forward to returning to his native land to serve the Church and people there.

He did so after Saddam Hussein was ousted from power in 2003.

Fr Ganni has since been declared a Servant of God, a preliminary step in being canonised a saint.