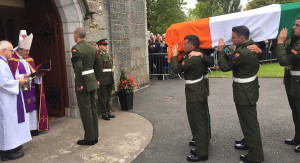 The state funeral and reburial of Irish patriot, Thomas Kent, who was executed by firing squad on 9 May 1916, was described as “most unusual” by Bishop William Crean of Cloyne on Friday.

“It writes the final chapter in a long ordeal for the Kent family as today serves as a moment of closure as they lay Thomas in his final resting place amongst his own people and alongside his family.”

Thomas Kent was one of the sixteen men executed following the Easter Rising, and one of only two executed outside Dublin; the other was Roger Casement, who was hanged in London.

Kent’s remains were exhumed in Cork Prison earlier this year and his relatives accepted the offer of a State Funeral. The Requiem Mass and reburial in the Kent family grave took place on Friday at St Nicholas’ Church in Castlelyons near Fermoy, Co Cork.

Full military honours were rendered at the funeral ceremonies and the Requiem Mass was attended by the President, Michael D Higgins, An Taoiseach, Enda Kenny TD, the Tánaiste Joan Burton TD, the Lord Mayor of Cork, the Cork County Mayor, and other dignitaries.

“This strange and unusual set of circumstances were forged by the tragic events of ninety-nine years ago when Thomas chose to give his life in the cause of freedom. He and others thereby sowed the seeds of the flowering of a new political dispensation which would become the Republic of Ireland, of which we are all beneficiaries,” Bishop Crean said in his homily.

The Bishop of Cloyne continued, “No doubt his dream for a new Ireland and the vigour with which he sought to realise that dream drew deeply from the well of inspiration of the generations who had gone before him.”

“My friends, when we recall the patriot/martyrs of the Easter Rising and thereafter a certain tentative mood prevails in our time, uncertain of the worth of violent resistance.”

The Bishop commented that violence and war are cruel instruments by which to accomplish any human endeavour.

“Violence and war as we witness today wreak havoc and tragedy in the lives of so many, leaving deep scars of sadness and loss which call out for retribution and revenge.”

“The person of zeal is profound in conviction and sure in the cause of right. Thomas Kent was one such man amongst others, women and men who shared his dream and sought to make it a reality. He and his compatriots dreamed the dream of freedom. They yearned to feel its bracing freshness in which identity, culture and commerce could prosper and flourish.”

“It is a source of immense gratitude to God that we in our time can witness the dawn of peace and engage in the difficult task of reconciliation,” Dr Crean said.

Thomas Kent was one of the sixteen men executed in 1916 following the Easter Rising, and one of only two executed outside Dublin (the other was Roger Casement, who was hanged in London).

Born in 1865, he was the fourth in a family of nine children.

In 1916, he was the eldest of four sons living with their mother, then in her eighties, in the family home at Bawnard House, Castlelyons, Co Cork.

Thomas had a great love of Irish culture, the Irish language and Gaelic games. He was also a member of the Pioneer Total Abstinence Association.

He joined the Irish Volunteers shortly after their foundation in November 1913.

By April 1916 he had risen to the rank of Commandant and was a leading member of the Galtee Battalion.

Conflicting orders from Dublin meant that the Kents did not take part in the Easter Rising.

However, they were among those selected for arrest in its immediate aftermath.

Thomas and his brothers Richard, David and William resisted arrest after the RIC surrounded their home on 2 May 1916.

Their mother was also in the house. A gun battle ensued, in which Head Constable William Rowe was killed and David Kent was injured.

Richard Kent was wounded trying to escape and died a few days later. Thomas and William were tried by court martial.

William was acquitted but Thomas was found guilty and sentenced to death. He was executed by firing squad on 9 May 1916 in the Military Detention Barracks, Cork and buried in an unmarked grave in its grounds.

In June 2015, his remains were exhumed and DNA testing confirmed their identity.

Apart from Roger Casement, Thomas Kent was the only one of the 16 men executed after the Easter Rising to be executed outside Dublin.