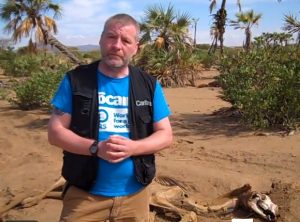 The chairman of Trócaire Bishop William Crean has warned that an urgent response from governments and the public is needed to deal with the crisis unfolding in East Africa, the scale of which he stresses is “unprecedented”.

Writing in the Irish Times on Tuesday, Bishop Crean highlighted that over 24 million people currently rely on food aid in the region due to a combination of drought and conflict.

“It is a scandal that in these days of technology and progress so many people can be left reliant on food aid to survive,” the Bishop stated in his ‘Rite & Reason’ column in the Irish Times.

He stressed that parts of South Sudan are already experiencing famine and there are fears that regions of Somalia will fall into famine over the coming weeks. Needs are also great in areas of Kenya and Ethiopia, where prolonged drought has severely disrupted people’s ability to grow food.

Somalia is facing the immediate prospect of famine after being struck by two consecutive seasons of poor rainfall. Areas in the centre and south of the country have registered only a third of their usual seasonal rainfall this year.

“For communities solely reliant on the land for their survival, the absence of rain deprives them of any way to provide for themselves. The conflict that has plagued the country for more than two decades has compounded the situation,” the Bishop explained.

This situation has contributed to an outbreak of cholera, with 51,000 cases and 782 deaths so far.

Describing the situation across Somalia as critical, he said more than 6.7 million people are in need of humanitarian assistance. An estimated 346,000 children under five are severely malnourished.

“Malnutrition rates have sky-rocketed – the number of sick children being treated for severe malnutrition has tripled in the last three months.”

In neighbouring Kenya, more than three million people need urgent food aid, with the number expected to rise to approximately four million by July. Among those in need are approximately 500,000 children under five.

More than half of the children screened in northern Turkana were found to be acutely malnourished.

Poor rains have led to crop failure in many regions of the country. The drought has led to an increase in food prices, while water sources have dried up. The reduced availability of food and water has led to large numbers of livestock dying, further reducing people’s access to food.

Two of the most crisis-affected regions are East Pokot and Turkana. Dr Crean said that acute malnutrition rates in Turkana are 30 per cent – twice the level considered critical by the World Health Organisation.

“Globally, this crisis has received very little attention. Appeals for aid are under-funded. For example, the UN has received just 37 per cent of the funding it needs to respond to the crisis in Somalia,” Bishop Crean wrote.

Describing the world as “distracted by the actions of a handful of powerful politicians”, he said that in East Africa millions suffer in silence.

“It is unacceptable for so many to go hungry. As Pope Francis has said, ‘today we cannot be satisfied with simply being aware of the problems faced by many of our brothers and sisters’”.

He added, “Their cries demand our attention.”

Aid agency Trócaire has appealed for support to help them respond to this humanitarian crisis.

Trócaire is one of the few international aid agencies operating in the Gedo district of Somalia, which is one of the worst affected areas. Over 7,000 people per month are being treated at Trócaire’s health centres there.

Trócaire’s response in Kenya is concentrated in hard-hit areas including Baringo and Turkana.

The agency is supporting feeding programmes for 4,000 children in three medical units in Turkana. “We are also trucking water to six schools in Barpello, East Pokot (Baringo County). This has allowed the schools to stay open and provide meals to the children attending the school.”

The agency is seeking funding to scale up its humanitarian response to reach an additional 3,000 children with emergency feeding; provide food or cash support to 66,000 households; repair boreholes or provide new ones to help six communities get access to water; and truck water to more schools, health units and communities.

Famine has been declared in one state of South Sudan (Unity State). Other regions of South Sudan are currently either one level below famine classification (‘emergency’) or two levels below (‘crisis’). People are now dying from starvation.

7.5 million people in the country – over 50 per cent of the population – will need emergency aid to survive over the coming months.

The crisis has been compounded by conflict, which has displaced millions and has severely disrupted crop planting.

Trócaire is providing monthly food rations to 12,000 of the most vulnerable host and displaced individuals in the Adior and Pagarau counties of Yirol East State through its partner Caritas in the Diocese of Rumbek.