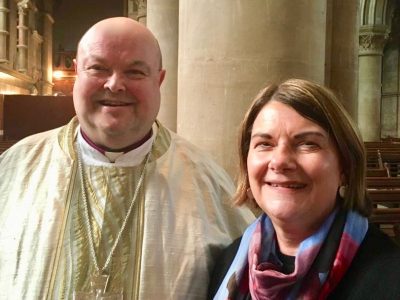 Bishop Paul Colton and his wife Susan Coltan. Pic: courtesy of the Diocese of Cork, Cloyne and Ross.

Bishop Paul Colton has become the longest-serving bishop of Cork Cloyne and Ross since Bishop William Lyon in 1617.

Speaking to the Irish Examiner newspaper about his milestone, Bishop Colton commented, “Living in post for a long time, while significant and historical, is a landmark, but I am very conscious that the real challenge is to try to be faithful to the calling and also to make a qualitative difference for the common good in partnership with others.”

He said there were predecessors in the 18th century who did longer periods in the several diocesan units when they were separate – Peter Brown in Cork and Ross, and Charles Crow in Cloyne. The privilege of being the longest to serve the United Dioceses of Cork, Cloyne and Ross since William Lyon’s death in 1617 is, he said, humbling.

“Being a bishop at all is, of course, both an honour and a responsibility; to be one for a long time is especially so,” he told the Irish Examiner.

Bishop Paul Colton was born in Derry on 13 March 1960 while his family were living in Buncrana, Co Donegal. His father was from Dublin and his mother from Wexford.  When he was two years old the family moved to live in Cork which he has always considered to be home.

He studied law at UCC and obtained a Masters and PhD in law from Cardiff University. He specialises in church law and the interface between the laws of religious communities and the laws of States.

In 1981, he began his studies for priesthood at the Church of Ireland Theological College, where he was awarded the Moncrieff Cox Prize for preaching.

He was ordained deacon in 1984 and served in the Diocese of Connor as curate in Lisburn, Co Antrim. His time in Northern Ireland prompted him to study for an MPhil at the Irish School of Ecumenics.

He is married to Susan Colton, whom he first met when they were attending the same primary school in Cork. They have two sons. She is currently Deputy Principal of St Luke’s National School, Douglas, Cork – the school where they met.

Bishop Colton works with a number of charities including St Luke’s Home for the Elderly in Cork. He is also a member of the National Suicide Research Foundation which is based in Cork and a patron of many societies and organisations including the London Cork Association, Ból Chumman na hÉireann, the Ballyphehane Pipe Band and the Cork Mental Health Association.

He is a big supporter of Man Utd football club and officiated at the wedding of David Beckham and Victoria Adams in July 1999.