On the 200th anniversary of the birth of a religious Sister known as ‘Mother Teresa of Manchester’, the local bishop has asked people to pray that she may be recognised as a saint and canonised.

Bishop Mark Davies of Shrewsbury said that Mother Elizabeth Prout was remarkable because of her work and witness among some of the poorest people of Victorian England.

He said she was an “educational pioneer” who founded schools for the industrialised poor and refuges for factory girls as she “dedicated her life to the service of the most abandoned”.

At the age of 28, Elizabeth became a nun and when she was given a teaching post in some of the poorest areas of industrial Manchester, she worked among Irish migrants who were considered the lowest of the low at the time, as well as with women, children and factory workers.

At the time, Manchester was emerging as a major industrial city and living conditions were so bad that in 1844 Friedrich Engels, co-author of The Communist Manifesto, described it as “this hell upon earth”.

However, Mother Elizabeth was tireless in helping the poor and established a chain of schools and hostels across the poverty-stricken parts of the North West of England. 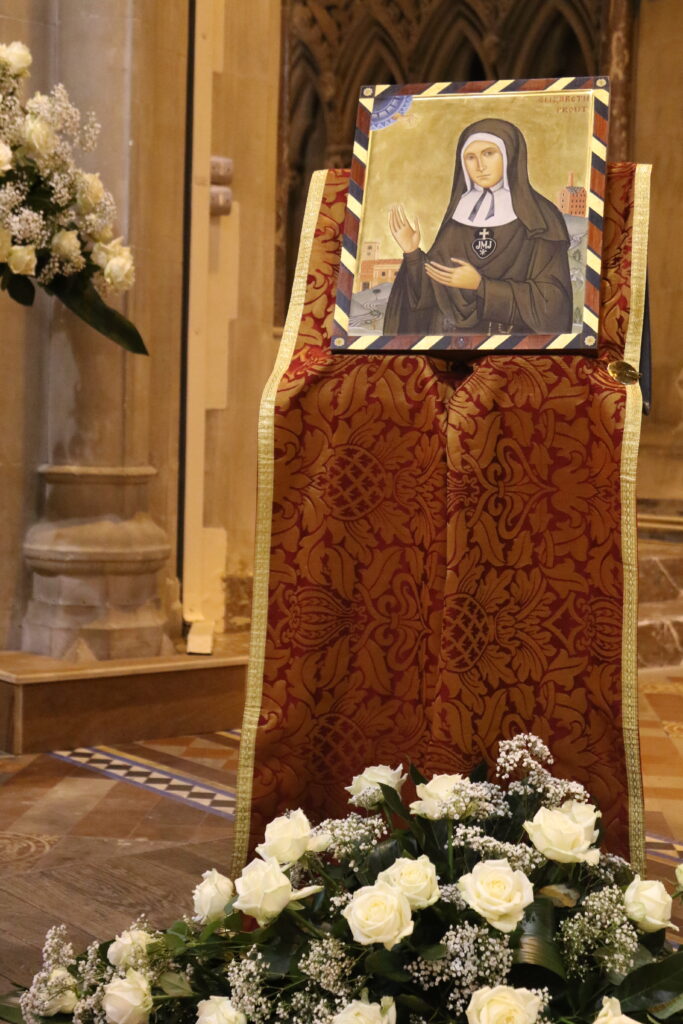 Bishop Davies preached the homily at Shrewsbury Cathedral on Wednesday 2 September, the 200th anniversary of the birth of Mother Elizabeth at Coleham, Shrewsbury, where her father Edward worked as a cooper for a local brewery.

He highlighted that Mother Elizabeth arrived in Manchester during the same period that Karl Marx and Friedrich Engels visited the city as they prepared to write The Communist Manifesto.

He said that while the two revolutionaries got together “to formulate the violent theory of Communism; an ideology”, the young Sister “risked violence herself to enter Manchester’s darkest and most dangerous streets in order to reach those in greatest need”.

“If Marx and Engels merely observed the condition of the poor, Elizabeth desired to live and die among them,” the bishop said. “She became a sister to the abandoned so they might recognise their own innate dignity as children of God.”

The Mass was attended by members of the Sisters of the Cross and Passion, the religious institute co-founded by Mother Elizabeth.

In his homily, the bishop posed the question of what she can teach us, two centuries later. “Wherever human life is devalued and discarded – in what Pope Francis describes today as a ‘throw-away culture’ – Elizabeth teaches how human dignity and true social progress are bound-up with love, Divine Love,” he said.

“In the face of the overwhelming denial of human dignity in the first industrial slums, Elizabeth took remarkable steps in both education and social care which continue to show us how human suffering always demands the service of love, not merely public services.”

He concluded by asking for prayers “that this woman of Shrewsbury – the Servant of God Elizabeth Prout – may soon be recognised among the Blessed of every time and place.”

Her work among the poor attracted other women to join her, and more than 20 of them were formed into a religious community by 1857. Pope Leo XIII approved the institute in 1863 and Elizabeth – known under the religious name of Mother Mary Joseph – was named as the first superior general. Today, the institute is known as the Passionist Sisters and is present in Great Britain and Ireland, the United States, Australia, Papua New Guinea, Botswana, Chile, Argentina, Peru and Jamaica.

Mother Elizabeth died from tuberculosis in St Helens, Lancashire, on 11 January 1864 at the age of 43 and was buried in the town, alongside fellow Passionists Blessed Dominic and Fr Ignatius Spencer, a relative of Princes William and Harry, whose sainthood cause is being scrutinised by the Vatican.

Her own sainthood cause was submitted to the Vatican in 2008. If it is concluded that she lived a life of ‘heroic virtue’, the search for two miracles will begin in earnest – one to declare her as Blessed and the other as a saint.