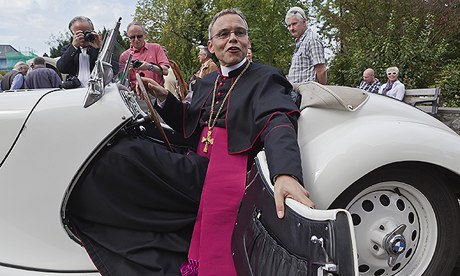 Pope Francis has accepted the resignation of the German Bishop who was suspended from office last year for his lavish spending of €30 million on the bishop’s palace in Limburg.

Bishop Franz-Peter Tebartz-van Elst was suspended last October as head of the Diocese of Limburg following complaints about the massive outlay on his residence.

A church inquiry was launched.

The controversy centred on the cost of the construction of a new bishop’s residence complex and related renovations.

Bishop Tebartz-van Elst defended the expenditure, saying the bill covered 10 projects and there were additional costs because the buildings were under historical protection.

The Vatican said on Wednesday that the inquiry found that Bishop Tebartz-van Elst could no longer exercise his ministry in Limburg and therefore Pope Francis had accepted his resignation, which was originally offered on 20 October.

A statement sent by the Vatican Press office to the administration of the Diocese of Limburg, said the Congregation for Bishops had “carefully studied the report of the Commission requested by the Bishop and by the Cathedral Chapter, to undertake thorough investigations about the responsibilities involved in the construction of the Diocesan Centre St Nikolaus.”

The statement further acknowledged that the Diocese of Limburg had come to “a situation that prevents a fruitful exercise of the ministry of Bishop Franz-Peter Tebartz -van Elst.”

Bishop Manfred Grothe, an auxiliary of the Paderbon archdiocese, was named apostolic administrator of Limburg until a new bishop is appointed.

The Vatican said the Pope had asked the faithful of Limburg to accept the move and to work to restore unity in the diocese which has been deeply divided over the Bishop’s profligacy.

The president of the German bishops’ conference, Cardinal Reinhard Marx, said the diocese would “need reconciliation, new trust, and the power of prayer”.

The Vatican said the 54-year-old Bishop would “in due course” receive another assignment. He had served in Limburg since 2007.