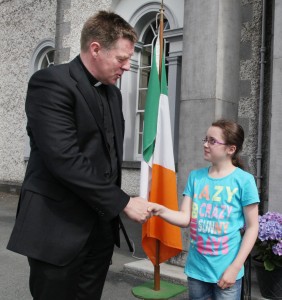 The Primate of All Ireland has paid tribute to the outgoing Bishop of Ardagh and Clonmacnois for his “faithful and faith-filled service” to the Irish Bishops’ Conference for the past thirty years.

Cardinal Seán Brady was responding to the news that Pope Francis has chosen Fr Francis Duffy of the Diocese of Kilmore to succeed 78-year-old Bishop Colm O’Reilly.

A former diocesan secretary and chancellor who has also held roles as a communications officer and financial administrator, 55-year-old Fr Duffy will oversee a rural diocese with a Catholic population of 71,806 across 41 parishes.

Bishop O’Reilly has acted as Chairman of the Council for the Missions, President of Cura and he also made an important contribution to the establishment of the National Board for Safeguarding Children in the Catholic Church in Ireland.

Paying tribute to the bishop-elect, Bishop Leo O’Reilly of Kilmore described Fr Duffy, a native of Templeport, near Ballyconnell, Co Cavan, as “a man of great faith, integrity and humility.”

He said he was highly respected and very popular with the priests and people of his diocese.

“He brings great qualities of generosity, leadership and scholarship to his new role. He will face many challenges as a bishop in Ireland today, but I have no doubt about his ability with God’s grace to meet those challenges.”

Fr Duffy has served in the diocese of Kilmore since his ordination in 1982. His work has been mainly in the field of Catholic education, first as a teacher in St Patrick’s College, Cavan and later in Fatima and Felim’s Secondary School in Ballinamore.

Between 1994 and 1996 he did an MA in Maynooth College and an MEd in Trinity College, Dublin. He later served as Principal of Fatima and Felim’s School from 1996 to 2008 before being appointed Chancellor and Diocesan Secretary of the diocese

In his acceptance speech, Bishop-elect Duffy said he was conscious that he was following “a wise and compassionate pastor and a much-loved bishop.”

He said he hoped to tap into Bishop Colm O’Reilly’s great wisdom and extensive knowledge gained over thirty years as bishop.

He also made a strong statement in support of the sanctity of human life, adding his voice to that of the Bishops of Ireland, and to other pro-life supporters, who he said had “clearly affirmed this important message in recent months.”

“Human life is both sacred and of immeasurable value in all its stages,” he said and added, “Understanding and compassion are key elements in promoting and protecting human life.”

Describing the lay faith as the “life blood of every parish”, he said there were many people engaged in running and administering various activities in their parishes.

“Today I commit myself to serving and sharing in your enthusiasm and commitment to the life of the Church. I shall continue the Herculean efforts of Bishop Colm whose pastoral care for this diocese created a welcoming, safe place for children and compassionate Church – even during the most challenging of times,” Fr Duffy said.

He suggested that for a diocesan priest the clergy form a sort of family or meitheal, who support, encourage and assist each other. “I am really looking forward to joining the priests of my new diocese, to listen, to learn and to be part of their mission in joyfully spreading the Good News of the Lord Jesus,” he said.

He also took the opportunity to send greetings to Bishop Ferran Glenfield who was recently consecrated as the Church of Ireland Bishop of Kilmore, Elphin and Ardagh.

Elsewhere in his address, he acknowledged the pressure many in Irish society are under. Referring to the nearly total destruction of St Mel’s Cathedral at Christmas 2009, he said “The silver lining in the dark cloud” of its destruction was the employment its reconstruction had provided to the local economy.”

Bishop-elect Duffy commended Bishop O’Reilly and all those engaged in St Mel’s restoration. The newly restored Cathedral will be opened towards the end of next year.

This is the Irish Church’s sixth Episcopal appointment since the papal nuncio, Archbishop Charles Brown, arrived Ireland in spring 2012.