Bishop appeals for information on ‘disappeared’ 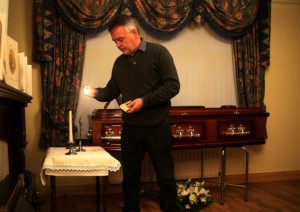 Kieran Megraw lights a candle beside the coffin bearing the remains of his brother Brendan Megraw who was abducted in 1978. Pic courtesy: www.newsletter.co.uk

Speaking ahead of attending the funeral Mass of Brendan Megraw, the Bishop of Meath said in a statement, “It is a matter of deep regret to the parish of Oristown that such evil acts took place.”

“One continues to hope that anyone with information that could help to locate the remains of other victims will come forward,” he said.

“This vital information, no matter how small or insignificant it might seem, would relieve the anguish of the families who have suffered greatly. I ask that we remember all those who have suffered in our prayers.”

Brendan Megraw was a 23-year-old married man from west-Belfast, whose wife was expecting their first child, when he was abducted from his home in April 1978.

Extensive searches, based on information received by the Independent Commission for the Location of Victims’ Remains, were carried out at a location in Oristown, Co Meath, and his remains were finally recovered last month.

In his homily at the funeral, Fr Aidan Brankin, parish priest of St Oliver Plunkett’s in Belfast, told the congregation of mourners, “Brendan, is finally getting the dignity of a funeral Mass today and we pray for the happy repose of his soul.”

He continued, “Among those ‘List for the Dead’ for November, Brendan’s name is written many times along with all those who have loved us or who have touched our lives with their love, their friendship and their faith.”

Fr Brankin recalled that Brendan Megraw was the third of Bobby and Brigid’s four children.

He was born in Glenavy in 1955. The family moved into Owenvarragh shortly after that, “lured and tempted by the prospect of running water and electricity – a big help with a young family”.

After school in St Finian’s and De La Salle Brendan became a sign writer and then worked in a carpet factory.

He loved metalwork, woodwork and just being creative. He had just got a job on the ships and was due to start there the week after he was taken on the 8 April 1978.

His father Bobby Megraw died in 1963 when Brendan was only eight years old which was very hard on all the family.

His mother Brigid died in 2002. At that stage Brendan had been missing 25 years.

“Brigid prayed for this day, when Brendan was found and he could have a funeral and be buried in the family grave,” the priest said.

“Unfortunately, Brigid didn’t live to see that prayer answered. But she wasn’t just praying for Brendan. Brigid prayed for all those who had been taken. She shared in the joy of other families when their loved ones were found,” Fr Brankin told the mourners on Friday.

He said Brigid Megraw shared their disappointments when a search proved unsuccessful. “They became like an extended family, supporting, encouraging and praying for each other – putting out appeals for fresh information even having their own song.”

Even today, Brendan’s family and friends are praying for those still missing that they too will soon be found – hoping that anyone with information that could help in that search will come forward, no matter how trivial they think it may be, Fr Brankin said.