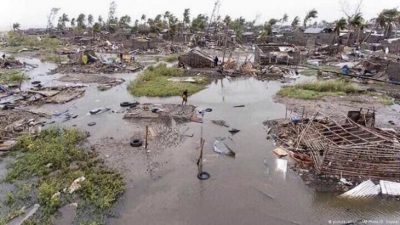 The Chairman of Trócaire, Bishop William Crean, has appealed for support for the agency’s Lenten campaign so that it can bring relief to people affected by Cyclone Idai in southern Africa.

On Monday, Dr Crean said the overseas development agency of the Irish Catholic Bishops’ Conference is responding to the crisis in the three countries affected – Mozambique, Malawi and Zimbabwe.

According to Trócaire, up to 2.5 million people have been left in urgent need of humanitarian aid after the cyclone destroyed large parts of the three countries.

The confirmed death toll in Zimbabwe, neighbouring Mozambique and Malawi has risen above 500, with hundreds more feared dead in remote towns and villages that were completely submerged.

Mozambican President Filipe Nyusi has said as many as 1,000 people could have been killed in his country alone.

Zimbabwean officials have said some 350 people may have died in their country.

Those figures could rise as remote regions are reached.

The cyclone hit Mozambique, Zimbabwe and Malawi over St Patrick’s weekend, destroying homes and crops, as well as leaving millions of people in need of shelter and food.

Trócaire has warned that the long-term effects of Cyclone Idai could be devastating, as entire crops have been destroyed.

“The scenes of devastation in southern Africa following Cyclone Idai are frightening in their impact. Our hearts go out to the millions who have lost loved ones, homes or livelihoods as a result of this terrible disaster,” Bishop Crean said in a statement.

He pledged to pray for the people of Mozambique, Malawi and Zimbabwe.

“The immediate needs are huge, but the long-term implications of this disaster are very worrying. Crops have been destroyed, which will lead to serious food shortages in the months ahead.

“As Chair of Trócaire, I urge people to support Trócaire’s ongoing Lenten Appeal. Donations to Trócaire during Lent will go towards providing short-term relief and long-term security to people affected by Cyclone Idai, as well as to millions of more victims facing similar crises around the world.”

Reminding people that “Lent is a time for giving and sacrifice”, he added “The terrible suffering of our brothers and sisters in southern Africa as a result of Cyclone Idai cries out for a generous response on our part.”

Trócaire’s local partners have been assessing affected areas. In one village of 350 houses, they reported that 30 per cent of the houses were completely destroyed.

The cyclone has left many areas inaccessible by both road and air, meaning that no official assessment has been done in large parts of the region.

“People in the region were waiting for rain so as their crops could grow, but what hit them was a cyclone that has destroyed everything in its wake,” Trócaire’s CEO, Caoimhe de Barra, explained.

“Trócaire is working with local partners in badly affected areas. We will be providing emergency relief to families who have lost their homes and crops. The long-term implications of this cyclone are enormous. People in the region could be left facing months of hunger as a result of the loss of crops.”

Meanwhile, Pope Francis has sent $50,000 each to Mozambique, Zimbabwe and Malawi to assist with initial emergency relief efforts to deal with the massive flooding caused.

The Vatican Dicastery for Promoting Integral Human Development will distribute the aid from the Pope through the nunciature in each country.

The Dicastery said the week of torrential rain had “razed to the ground tens of thousands of homes and public buildings” and made major roads impassable.

The water and electricity distribution systems have been compromised and there is a growing concern about the spread of diseases, particularly through unclean water.

The Vatican described Pope Francis’ donation as a “first contribution” and “an immediate expression of his feeling of spiritual closeness” to the people impacted.

The contribution, it highlighted, was only “part of the aid that is being gathered throughout the Catholic Church” from bishops’ conferences and charitable organisations.