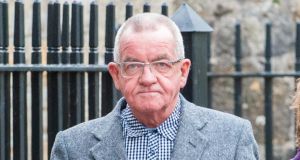 The Bishop of Killala has announced that the priest serving in a parish in the diocese who was locked in a legal battle last week with his ex lover over the ownership of a Co Donegal cottage is taking leave from ministry.

In a letter read out at Masses on Sunday in parishes across Killala, Bishop John Fleming said news of the recent court case involving Fr Gabriel Rosbotham “came as a complete shock to me, to the priests of the diocese and I am sure to all of you.”

He added that what was revealed in court had “caused deep distress”.

The Bishop revealed that since the court case ended, he had met with the priest and that Fr Rosbotham had “decided to take some time to himself, away from the diocese, to reflect on his life, on the commitments he made and on his ministry, as well as to think about the future.”

Dr Fleming added, “I know that you will join with me in praying for him, as he seeks God’s guidance for the way forward.”

For the past seventeen years Fr Rosbotham has ministered in parishes in Killala diocese and according to Bishop Fleming he has “received great appreciation for his pastoral care, his ability to relate to the young, his effectiveness as a preacher and, in particular, for his singing at Mass.”

“I am deeply aware of the sadness of very many people in this community, as well as the great shock felt by so many at the revelations made during the court case,” Bishop Fleming stated.

He personally read the letter out to parishioners in Kilmoremoy in Co Mayo, where Fr Rosbotham had been serving as a curate.

“I am offering this Mass for all of you and for all those hurt, distressed or disillusioned by what has happened,” he told them.

Elsewhere in his letter, Bishop Fleming said the “Church and, in particular, the Christian community of which each of us is a member, is the place where we are joined to Christ, our Lord, and where we support one another in good times and in bad.”

“It is also the place where we find forgiveness, hope, encouragement and healing. I hope and pray during these coming weeks and months that the Lord will be with all of us to renew our own faith, and the faith and trust of this community.”

Fr Rosbotham sued his former partner, Hugo Crawford, who was also formerly a member of the Franciscan order, over the rights to the Co Donegal cottage.

Last week, the judge presiding in the case ruled that Fr Rosbotham was entitled to a 27 percent share of Rose Cottage.

The cleric and the former Franciscan Brother shared the house between 1994 and 2002 after they began a relationship in the 1980s.

That ended in 2002 in a dispute over the role of Hugo Crawford’s family.