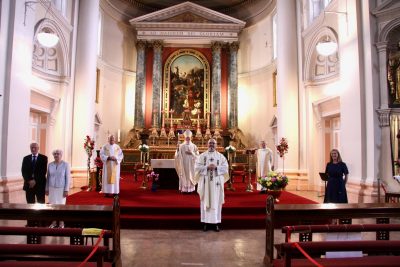 In a tightly restricted ceremony, due to the Covid-19 pandemic, Fr Leahy was joined by immediate family, as well as some friends and members of the Jesuit community in Ireland.

In his opening comments, Bishop McGuckian alluded to the extraordinary circumstances in which the ordination was taking place.

“It is good for us to be here gathered with Niall and Niall’s parents, Sean and Patricia, and his sister Maire, as well as family and friends, brother Jesuits and those joining over the webcam. It is a joy for me to celebrate this special ordination in Gardiner Street where I was ordained myself.”

Addressing the masked congregation, including Fr Niall himself, the Jesuit bishop added, “This is a wonderful moment. Words can hardly express the extraordinary strangeness of it all.”

In his homily, Bishop McGuckian told Fr Niall that there was “a great providence” in his being ordained on 22nd August, the Feast of Mary Queen and Mother, and that his priesthood would forever be linked to the Queenship and Motherhood of Mary.

Elsewhere in his homily, Dr McGuckian said that his Jesuit charism was both contemplative and ascetic. Speaking about the ministry of interiority, the Bishop of Raphoe commented, “The Church is crying out for interiority.”

He recalled theologian Karl Rahner’s comment that the Christian of the future will be a contemplative or not at all.

“We need a ministry of interiority. The Jesuits aren’t the only ones who have the Spiritual Exercises, many lay faithful have discovered the Spiritual Exercises and fallen in love with them and God through them. Many other religious and priests have them. But as a Jesuit your responsibility is to hold this treasure. It is not a treasure like you hold in a museum – it is a treasure that gets held by being lived.”

Dr McGuckian told the new Jesuit priest that as a Jesuit and as a priest his service was “to the Lord alone and his spouse, the Church under the Roman pontiff.”

Referring to the Jesuit document on priesthood produced by the 34th general congregation of 1995 which speaks specifically about priesthood, Bishop McGuckian said, “I was reminded that St Ignatius and his companions chose not to offer their priestly service to any particular bishop and his diocese but for the universal Church under the Pope.” 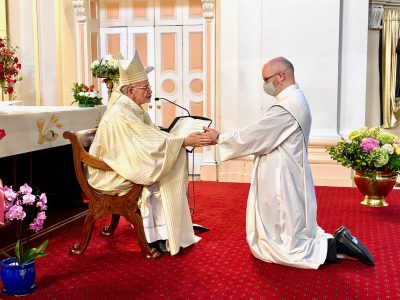 One of the tasks the document suggests Jesuits consider doing is finding words to speak to the men and women of their time who are no longer moved by the Christian message.

Another is being faithful to the tradition of the Church and at the same time interpreting it in secularised cultures.

Fr Niall Leahy is from Blackrock, Co Louth, and worked as an accountant before entering the Society of Jesus in 2009 when he was 27.

For a time he worked at Clongowes Wood College, the Jesuit boarding school in Co Kildare, where he taught Business and French, and was involved in many of the pastoral activities.

He studied for an MDiv at Regis College, Toronto and did a post graduate degree in theology and ecology in the UK.

In Ireland he has been a familiar face at Youth2000 events. He has a love of singing and music and has been involved in choirs and written many songs of his own.