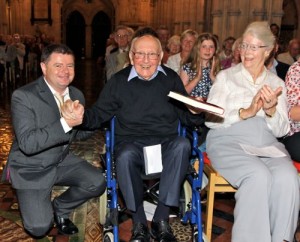 Dr Donald Caird is presented with a copy of his autobiography by the author, Aonghus Dwane. Also pictured is Nancy Caird.

The former Church of Ireland Archbishop of Dublin, Dr Donald Caird, is the subject of a new biography which was launched in Christ Church Cathedral on Saturday evening.

The launch took place in the context of the centenary celebrations of Cumann Gaelach na hEaglaise, the Irish Guild of the Church.

The biography, titled ‘Donald Caird: Church of Ireland Bishop: Gaelic Churchman: a Life’ is published by Columba Press, and it was launched by Mrs Justice Catherine McGuinness who described it as “both scholarly and accessible”.

Dr Caird was presented with a copy of his biography by the author, Aonghus Dwane.

Also present was the Church of Ireland Archbishop of Armagh, the Most Revd Dr Richard Clarke and another former Archbishop of Dublin, Dr Walton Empey.

This biography explores Dr Caird’s career from the earliest days. As Bishop of Limerick, Bishop of Meath and Kildare, and Archbishop of Dublin successively, Dr Caird enjoyed a distinguished career in the Church of Ireland.

It looks at his lifelong interests in the Irish language and ecumenism.

His time in office, particularly as Archbishop of Dublin in the mid–1980s to mid–1990s coincided with historic developments in the life of both Church and State, including the great “liberal agenda” debates on contraception, abortion and divorce in the Republic; the ordination of women to the priesthood in the Church of Ireland, and the developing peace process in Northern Ireland.

A man who had met both Peig Sayers and CS Lewis, the broad scope of Donald’s friendships and interests both North and South afforded him an unusual insight into many aspects of the Irish scene, combining leadership of the southern Protestant community with interested engagement in other streams of Irish life.

Welcoming everyone, Dean Dermot Dunne, said Christ Church was proud to host the launch and described Dr Caird as a man who had given huge commitment to the Church of Ireland, the dioceses and the Gospel.

Catherine McGuinness said that the book had recreated many memories for her and she added that Aonghus Dwane had created a fully rounded picture of Dr Caird within his community, his Church and his family. She spoke warmly of Dr Caird and his contribution to the Church and love of the Irish language.

She described the author, who in a previous career had appeared before her in court on many occasions as a senior prosecution solicitor, as meticulous and said he had carried that through to his writing of the biography which she stated was “extremely well researched but also very readable”.

Aonghus Dwane thanked Cumann Gaelach na hEaglaise for their support for the book.

Dr Caird’s wife Nancy described the launch to a Christening which followed a very long gestation. “It’s immensely readable. Aonghus has a tremendous turn of phrase,” she said.

Dáithí Ó Maolchoille of Cumann Gaelach na hEaglaise observed that Dr Caird was the most senior member of the organisation.

Originally from Cork city and a graduate in law of UCC, he worked as a senior prosecution solicitor before moving to the Irish language sector in 2005.

A contributor to various various newspapers and journals, he was director of the Celtic Revival Summer School linking Dublin and the Aran Islands in 2006, and has also worked with Colmcille, the Irish–Scottish Gaelic cultural agency.

The launch took place following a service of Urnaí na Nóna (Evensong in Irish). A reception was held afterwards and those present also had an opportunity to view a new exhibition in the cathedral marking notable events in Cumann Gaelach na hEaglaise’s history.