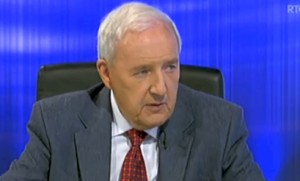 RTE broadcaster, Bill O’Herlihy, has said he was “shocked” by the Vatican’s treatment of Fr Tony Flannery.

Referring to the Redemptorist as “a good priest”, the sports commentator said the manner in which Rome had dealt with Fr Flannery “would not have been out of place at the time of the Inquisition.”

He was launching the censured priest’s new book, ‘A Question of Conscience’ at the Royal Hibernian Academy on Thursday evening.

To a packed room of 300, Bill O’Herlihy, who is a daily Mass-goer, hit out at the Irish bishops “who seemed to possess no real leadership” and had allowed the Vatican’s Congregation for the Doctrine of Faith (CDF) assume more and more control of the Church.

He underlined that he was “no philosopher or Church professional. I’m simply a committed Catholic who tries his best to live according to the rules, who attends Mass on Sunday and if possible every day.”

He added, “I don’t have an axe to grind, I’m not part of any movement within the Church, I’m simply an ordinary Joe fighting to hold on to my faith and overcome the doubts which, from my experience, grow rather than decline with age.”

Explaining how he knew Fr Flannery, he said they had met at his mother’s funeral. “He said the funeral Mass and gave the homily. It was very different to the usual – full of love for a mother who had been such an anchor for him and his brothers but challenging, open and enlightening about the conversations they shared before her death.”

“Conversations about the existence of God, the existence of Heaven and a range of other theological and philosophical subjects that marked Tony, in my mind, as a special priest. Not for him the pious platitudes we hear so often in Church. He made you think, he helped your thinking and that in my view is the greatest gift a priest can give us. Or it should be.”

Elsewhere in his address, he explained that while he doesn’t agree with all of Fr Flannery’s views, he was, nevertheless, “an honest and good man and a good priest.”

He added, “What I read of the way he’s been treated makes me ashamed of the actions of those representing my Church.”

“Consider the facts for a moment: the Vatican Congregation for the Doctrine of the Faith made accusations against Tony, passed judgment against Tony and decreed penalties to be imposed on Tony before Tony was aware anything was happening. How can this be justified?” he asked.

The sports commentator also questioned why the Vatican refused to deal directly with the Redemptorist in spite of the seriousness of the accusations levelled against him.

He referred to an “extraordinary communication” sent to Fr Flannery on unsigned and unheaded paper which threatened the priest with excommunication “as a heretic for his views on the origins of the priesthood.”

Last January, Fr Flannery (66), who has been a Redemptorist since 1964, revealed that he had been threatened with excommunication by the CDF over his views on women priests, contraception, the priesthood and celibacy. He was told he could not minister as a priest and remain in his order unless his recanted his views publicly.

Speaking after the launch to CatholicIreland.net, Bill O’Herlihy described Fr Flannery as “a very special priest” and urged him to remain in the priesthood saying he was the kind of cleric who sustained the faith of people like him.

Fr Flannery told CatholicIreland.net that his legal advisers were shocked at the CDF’s procedures, which they regarded as being completely contrary to the normal processes of civil law. These included not giving him an opportunity to defend himself and not providing him with access to relevant documentation.

In the foreword to the book, former president of Ireland, Mary McAleese described the priest, who next year should be celebrating the fortieth anniversary of his ordination, as a “scrupulously faithful critic of his fallible and at times failing Church.”