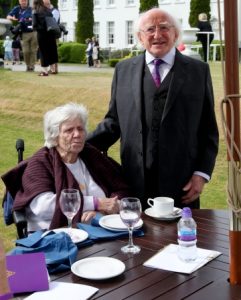 Stigma, shame and an unreceptive society condemned so many women to concealing their experiences in the Magdalene laundries and their trauma, according to President Michael D. Higgins.

In his address to more than 230 women who worked at the laundries, and who were present at Áras an Uachtaráin on 5 June, he said that in recent years the silence has been broken.

“All of you and all of the other women who cannot be with us today were failed by these institutions, the experience of which you share, and the religious orders that ran them,” said the President.

“You were profoundly failed by the State which, in its relationship to these institutions, should have had your welfare at its core. You were failed by governments that knowingly relied on the existence and practices of these institutions rather than addressing your particular needs in other, more sympathetic ways,” he said.

He then added that the women were also failed by a society that “actively colluded in your incarceration and treatment” or looked the other way, “averted their gaze, as vulnerable girls and women were subjected, in so many cases, to further abuse and degradation”.

The President referred to the importance of representative groups, the Inter-Departmental Committee to establish the facts of State involvement with the Magdalene Laundries and Justice Quirke in the construction of a redress scheme. However, they also have had to work with the Ombudsman in addressing deficiencies in that scheme.

“This has been vitally important, not only for you as individuals but also for Ireland as a nation, as we try to come to terms with, and face up to, our failings in the past,” he said.

He added that the treatment of vulnerable citizens in industrial and reformatory schools, in the Magdalene laundries and in mother and baby homes represents a deep stain on Ireland’s past.

“Ireland failed you. When you were vulnerable and in need of the support of Irish society and its institutions, its authorities did not cherish you, protect you, respect your dignity or meet your needs and so many in the wider society colluded with their silence,” he said.

He highlighted how the women telling their stories forced Irish society out of denial. He also paid tribute to all those who initiated research to draw attention to the women’s stories and to break the silence.

Referring to the apology by An Taoiseach, Enda Kenny, in the Dáil in 2013, the President of Ireland also apologised. “I want to acknowledge again the wrong that has been done to you, the pain that has been caused in your lives and the opportunities that have been lost to you as a result of your mistreatment. Today, here in Áras an Uachtaráin as President of Ireland, mar Uachtarán na hÉireann, I apologise to you – survivors of the Magdalene regime,” he said.

He said he hoped that those present will be able to make peace with the past, and that forgiveness “can play a central and necessary part” in healing.

Speaking of a “healing journey”, he said that those present were the best judges as to the timing of that and “as to when it was too early, or as to when it might be too late, and the consequences of both”. 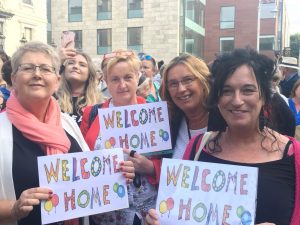 The Dublin Honours Magdalenes event took place in Dublin from 4 to 5 June 2018. Eight buses transported the women and their companions between venues that included Citywest, Áras an Uachtaráin and the Mansion House.

On Monday 4 June the women and companions arrived in Dublin and during the afternoon were welcomed at Áras an Uachtaráin for a special event hosted by President Michael D. Higgins and Sabina Higgins.

That evening they attended a Gala Dinner and Entertainment at the Round Room, Mansion House. Organisers encouraged members of the public to be present and line the streets to welcome the women to the gala evening at the Mansion House, Dawson Street.

Nora Casey, who has been involved in organising the two days, was MC, and Minister for Justice and Equality, Charlie Flanagan TD, and Lord Mayor of Dublin, Mícheál MacDonnchadh, welcomed them.

On the evening of Wednesday 6 June around 600 people attended dinner and entertainment with Riverdance at Citywest Hotel. Those present included the survivors and many of their relatives and key people who have supported the women.