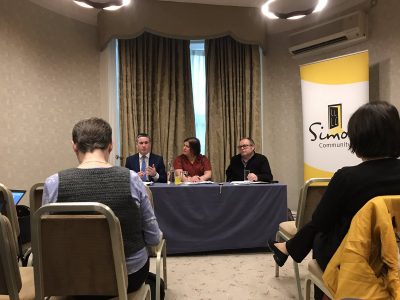 There has been a 60 per cent increase in people seeking the emergency housing and support services of the Simon Communities of Ireland over two years from 2015 to 2017.

“Today we are reporting the number of people we worked with last year increased to 13,304 people. This is an increase of two thirds in just two years,” said Niamh Randall, National Spokesperson for the Simon Communities in Ireland.

“The scale of the problem means that at least 81,000 men, women and children will face Christmas this year without a secure place they can call home and are looking to 2019 with increasing despair. Looking at our figures for the first six months of 2018, we can already see significant increases in the numbers being reported,” said Niamh Randall.

Up to June 2018, Simon worked with 3,140 families with 3,255 children compared with 2,006 families with 3,799 children for the whole of 2017. Niamh Randall reiterated Simon’s assertion that there is nowhere for people to go after emergency accommodation, as the private rental sector cannot provide the homes that are needed and there is not enough social housing.

She emphasised that the many thousands of people who are homeless or living in fear of losing their home face a traumatic and stressful time filled with uncertainty. “The Simon Communities see this impact on people each and every day all across the country,” she said.

These details were released as Simon Communities in Ireland launched its Annual Report for 2017 with Damien English TD, Minister for Housing and Urban Development.

“In addition to vital public donations and fundraising, the Department of Housing allocated over €10 million in funding to the Simon Community in 2017, to support the work that you carried out working in partnership with Local Authorities,” stated the Minister. He also paid tribute to the great work done by staff and volunteers at Simon.

Niamh Randall said that the government must do better in 2019 and recognise that the private sector alone will not deliver the housing that people need.

“We need the State, in conjunction with Local Authorities and Approved Housing Bodies, to build social and affordable housing across all tenure types quickly within sustainable communities nationwide; to prevent more people from becoming homeless; and to address the complex or multiple needs that can be a cause or consequence of homelessness. There must be a concerted focus on preventing people from losing the homes that they have,” she said.

Niamh Randall added that housing must be recognised as a fundamental human right in the Irish Constitution. On behalf of Simon Communities she urged the government to ensure that systems and structures are put in place to protect and support people, preventing homelessness from occurring in the first place.

She explained that to be adequately housed means having security of tenure – not having to worry about eviction. It means having the right to live somewhere in peace and dignity with access to appropriate services, schools, and employment.

The Simon Communities Annual Report 2017 was launched on 11 December 2018 in Dublin.