Where does the money you put in church plate collections go? How much do you know about how your church donations are spent?

How easily you can answer these questions depends very much on what diocese you belong to according to a new report published by the Association of Catholic Priests (ACP) and the lay reform group We Are Church in Ireland.

According to a ‘Transparency Table’ published this week on the ACP website, the diocese of Ossory, headed by Bishop Dermot Farrell, is the best in Ireland for publishing information about diocesan finances, with the Diocese of Cork and Ross, headed by Bishop Fintan Gavin, listed in second place.

Interestingly, these two bishops were both elevated to the Irish hierarchy in the last two years, so their appointments may have been in line with Pope Francis’s more open style of Church governance.

Erroneously, the ACP report claims that Cork & Ross does not publish its diocesan accounts on its website, but as Fr Tom Hayes pointed out to the Catholic Ireland, the diocese has been publishing its accounts online since 2002.

The Transparency Table uses scores based on ten criteria developed by the Voice of the Faithful group in the United States, including the availability of diocesan financial accounts on diocesan websites, publication of Diocesan Finance Committee Membership and the ease of access that a diocese provides about financial information and their operations.

In the United States, nearly two-thirds of dioceses (65%) publish their audited accounts online, in Ireland the number is almost half that (38%), according to Colm Hughes of We Are Church who collated the Irish diocesan transparency scores.

Mr Hughes commented: “The two largest [most populous] dioceses, Dublin and Down and Connor, are near the top of the table. Smaller dioceses like Ferns and Elphin have performed well and are keeping their websites updated. 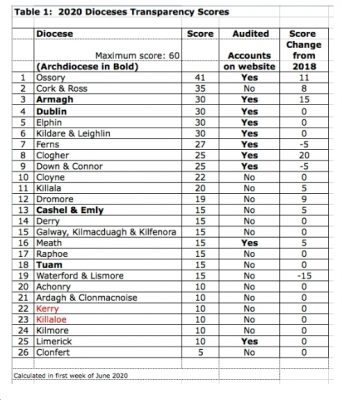 “Most disappointing of all is the fact that two dioceses, Kerry and Killaloe, make no financial information available on their websites or on the Charity Regulator websites.”

He also noted: “Despite legislation requiring charities to report to the Charity Regulator being a legal requirement since 2014 only ten of our 26 dioceses include their annual accounts on their diocesan websites. Of course, they are not required by law to include their accounts on their websites, but today most people seek information online and expect it to be provided in an open and transparent manner.”

Another factor noted in the report is the paucity of lay representatives elected as trustees on diocesan finance committees. In fact, with clergy forming 94% of diocesan trustees, lay men comprise only 3% of trustees and 3% lay women.

Separately, this week the Association of Catholic Priests published a commentary by Soline Humbert that points out that bishops are free to publish the contents of their Ad Limina reports and many do so in other countries, but in Ireland these reports are kept secret from the laity.

The reports are submitted to the Roman Curia or civil service every five years during the bishops’ trip to Rome to visit the tomb of St Peter.

“Reports by bishops are meant to give an honest, transparent and detailed account of the current state of their diocese,” says Ms Humbert. “They cover everything from basic statistics (Catholic population, baptisms, marriages, funerals, etc.) to financial status, relations with other religious communities, civil society and public authorities as well as responses to child sexual abuse, pastoral challenges and prospects for the future of the Church.”

Listing bishops in Canada and in Nigeria who have published their Ad Liminae reports, Ms Humbert said: “Good governance demands that the prevailing clericalist culture of secrecy must end. The Church is not a corporation and these reports are not sensitive commercial information. Accountable and transparent behaviours are not optional courtesies or favours but rather necessities in a faith community of brothers and sisters in Christ.”

The International Church Reform Network (ICRN) recently published a Charter of Rights and Responsibilities for Christ’s Faithful, which claims: “Every Catholic has the right of unlimited access to information, except where there are legitimate concerns regarding confidentiality, privacy and the good name of others.”