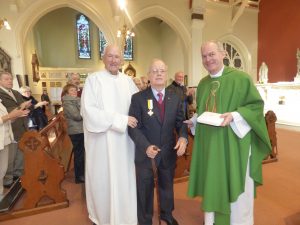 One of the highest honours the Church can bestow on a member of the laity was presented to a member of a prominent GAA footballing family in Co. Laois on Sunday.

The Benemerenti medal was awarded to Kyrle Delaney in recognition of his generous and committed service to the Church and the local community in the town of Stradbally.

Mr Delaney told CatholicIreland.net he was “surprised, delighted and almost overwhelmed to have such an honour bestowed”.

Local parish priest Fr Sean Maher described the papal recognition as “one of the worst kept secrets in Stradbally in a long time”.

He said it was important to honour those who offered diligent, humble service and he thanked the father of 4 for his 25 years as a sacristan as well as his role in the parish choir and involvement with the Tidy Towns Committee.

Highlighting that “He comes from a family of noted footballers” and that his brothers and cousins played at county level for Laois, the priest said that though they had brought many medals back to Stradbally, this was the first pontifical medal to cross the family threshold.

Fr Maher read the proclamation both in Latin and English. It described Kyrle Delaney as “well deserving” of the honour for his “widespread and local services to the church and community”.

The medal was blessed by Pope Francis before it was forwarded to the parish through the Papal Nuncio. Each medal hangs on a yellow and white ribbon, the papal colours.

The Benemerenti Medal was originally established as an award to soldiers in the Papal Army, but was later extended to the clergy and the laity for service to the Church.

Mr Delaney’s eldest child, Mairéad, told CatholicIreland.net that the family was very proud of their father. “His creed has always been to do things the right way. It is truly impressive to see his contribution to the Church and faith community acknowledged in this way.”

Speaking as Kyrle Delaney was surrounded by his wife Margaret, his children and grandchildren, extended family and friends, Fr Maher said the honour was “extraordinarily important for the local community. It is a reminder that our communities are alive – alive to sincerity, co-operation and the goodwill of so many Kyrle Delaneys. In a sense, Kyrle is symbolic of 200 people who were all at Mass today, many of whom could have deserved to get that medal as well.”

He said that was not to take from Kyrle’s particular or singular contribution. “I am saying our communities are alive because of the goodwill, kindness and that sense of service. Stradbally is a rural community, it preserves that sense of a rural community very strongly which means that the rhythms of nature are still respected here in a way that they are not always respected elsewhere.”

More generally, Fr Maher said that Irish people’s expression of faith comes from the simple events of life such as the offering of hospitality on the road, the offering of hospitality after Mass on Sunday, the care of people around funerals or weddings and the birth of children – and that shake of the hand for so many different things. “That is where our communities are most alive and that is where our faith is articulated most poignantly and also most really.” 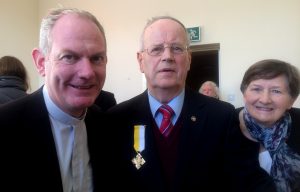 One of the well-wishers at Sunday’s Mass was Dominic Harnett, who told CatholicIreland.net that the presentation of the prestigious medal “gives hope that a small community can be recognised in Rome and the community can understand that a nice, good Christian life has its rewards.”

In a nod to Kyrle Delaney’s relatives’ GAA prowess, he said “Sometimes you mightn’t get that recognition on the field but Kyrle has managed to get the best medal of all … he is an inspiration as a Christian, not just inside the Church but also outside on the street doing amazing work on the Tidy Towns or down on Stradbally lake.”

He described Mr Delaney as a man of faith. “He has a great belief that the Church can solve a lot of people’s problems if they would take the time to come in and just sit and pray.”

He also paid tribute to Kyrle’s role, along with retired parish priest Fr Sean Kelly, in fostering ecumenism in the town, especially for St Patrick’s Day.

Another parishioner, Har Ramsbottom, paid tribute to the retired sacristan, stating that the medal was “Well justified. He is a great man and will be missed.”