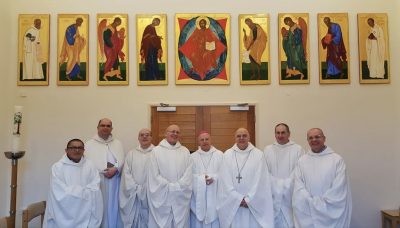 The Benedictine monastery in Rostrevor has been elevated to the rank of an Abbey, and in keeping with its change of status its first Abbot was appointed on Saturday.

Dom Mark-Ephrem M. Nolan OSB, who has served the community in Rostrevor as its Superior and Conventual Prior since its foundation in 1998, was chosen by the community as their first abbot.

On 1 February 2019, Dom Diego M. Rosa OSB, Abbot General of the Benedictine Congregation of St Mary of Monte Oliveto, elevated the Monastery of the Holy Cross in Rostrevor, to the rank of an Abbey of the Order.

In light of this change of status, the Chapter of Holy Cross was convoked to elect an Abbot.

The decision to elevate the monastery to the rank of an Abbey was taken, a statement explained, by the Abbot General and the Governing Council of the Olivetan Benedictine Congregation “to express a widespread appreciation of the particular monastic and ecumenical witness lived by the monks there”.

It was also an encouragement to them to “fulfil their calling and Gospel witness”.

On 9 March, Dom Mark-Ephrem M. Nolan, OSB, was confirmed as Abbot. At the community celebration of the Eucharist he was presented to the People of God by the Abbot General who bestowed upon him the pectoral cross of his office.

The Benedictine monks intoned a Te Deum – an ancient hymn of thanksgiving – as Abbot Diego M. Rosa led Dom Mark-Ephrem Nolan to his choir stall, after which the monks present renewed their vow of obedience to the new Abbot.

The statement noted that 9 March was “an apt date” for this historic event at Rostrevor as it was the feast day of St Frances of Rome, a feast celebrated by Olivetan communities throughout the world.

Frances, a Roman noblewoman (1384-1440), lived her life as a wife, mother, widow and later as a nun. In 1425 she became an oblate (lay associate) of the Olivetan Benedictine Abbey of Santa Maria Nova in Rome.

In 1433 she founded a monastery of nuns at Tor de Specci, near the abbey of her oblation, which was integrated into the Olivetan Benedictine Congregation.

According to the Benedictine statement, “St Frances is especially remembered for her generous spirit, heartfelt compassion and outpouring of abundant charity towards the poor and needy. She was animated by a passionate love for the Church, expressed in her profound longing for its reform and for its unity.”

The creation of Holy Cross Abbey in Ireland coincides with the seventh centenary of the foundation of the Congregation’s Arch-Abbey of Monte Oliveto Maggiore, near Siena in Italy on 26 March 1319.

He was novice-master at Bec for a number of years. In 1998 he was asked to lead the group of monks who came from Bec to establish a Monastery in Northern Ireland in the Diocese of Dromore, and since then has served as Prior in Holy Cross Monastery Rostrevor.

In recent years he has also been a Definitor of his Olivetan Benedictine Congregation. In this role his role is to assist the Abbot General in the government of the international network of Olivetan abbeys and monasteries.

Abbot Mark-Ephrem will continue to exercise this international oversight role in the Congregation.

In 2018 he was re-appointed to this role by Most Reverend Archbishop Richard Clarke, the present Church of Ireland Primate of All Ireland.