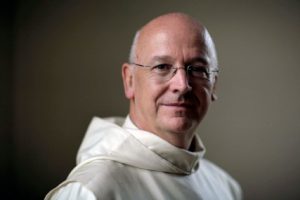 A former UN official turned Benedictine monk is leading a festival of prayer and meditation on a remote island off the Co Cork coast this week.

Fr Laurence Freeman OSB, who is one of the world’s leading experts on mindfulness and meditation, will lead the ‘Bere Island Music and Silence Festival’.

The island, which has a population of just 100 people, will be joined by people from the all over Ireland and the UK for the festival.

Born in England in 1951, Fr Freeman was educated by the Benedictines and studied English literature at New College, Oxford University.

Before entering monastic life, he had experience with the United Nations in New York, and in banking and journalism.

Today, Fr Laurence is a Benedictine monk of the Monastery of Christ our Saviour, Turvey, England, a monastery of the Congregation of Monte Oliveto. He is Director of the World Community for Christian Meditation.

In the monastery, his spiritual teacher was John Main. He helped Fr John to establish the first Christian Meditation Centre in London.

At the invitation of the Archbishop of Montreal in 1977, he accompanied John Main to establish a Benedictine community of monks and laypeople dedicated to the practice and teaching of Christian meditation.

Fr Laurence studied theology at the Universite de Montreal and at McGill University. He made his solemn monastic profession in 1979 and was ordained to the priesthood in 1980.

After the death of John Main in 1982, he continued the work of teaching meditation that had already begun to develop a global community.

In 1991, Fr Laurence returned to England to establish the International Centre of the newly formed World Community for Christian Meditation, now present in more than a hundred countries and which has become a ‘monastery without walls, in which he travels and teaches widely.

Speaking this week to the Irish Examiner newspaper, Fr Freeman said that he was always impressed with Bere Island having visited it for the first time as a 12-year-old school boy.

“It was a simple life; it didn’t have all the mod cons. I think the lack of indoor plumbing was the biggest shock – that and being in a rural environment. It woke me up to a broader experience of life and community and I came to love it.”

He never actually intended to become a monk at all – after school he worked first as a merchant banker, then with the UN and later even tried his hand as a freelance journalist.

Then in the late 1990s, the World Community for Christian Meditation acquired a house on Bere island off the Cork coast.

They started a meditation group on the island – one of what was by then a network of 300 Christian Meditation around Ireland.

“We introduced meditation to children in the island school and they loved it and it’s something we still do.”

Fr Freeman, who is the author of a number of books including Light Within, Selfless Self as well as been the principal editor of John Main’s works, enjoys attending the music and silence festival. This is the third to be held on the island.