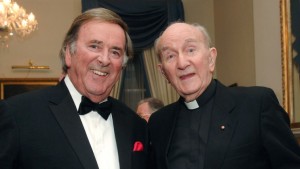 The headmaster of Belvedere College and some of Terry Wogan’s former classmates at the Jesuit school have been paying tribute to the much loved broadcaster.

On the website of the Jesuits in Ireland, the order highlighted that Wogan was Jesuit-educated, attending Crescent College Comprehensive in Limerick, his native city, and Belvedere College SJ in Dublin.

Describing the recently deceased Irish entertainer as “always supportive of Belvedere” it recounts how he made his last visit to the college for the Past Pupils Union dinner in November 2009 where he gave a memorable address to past pupils.

Gerry Foley, the present principal of Belvedere College, paid tribute to him on his own behalf and on behalf of his alma mater.

He offered condolences to Terry Wogan’s beloved wife of 50 years, Helen, their children and the extended family including his brother Brian.

“The flood of international tributes naturally focuses on his amazing broadcasting career but here in Belvedere – and particularly amongst his mates in the ‘Class of ‘56’ – we remember a great friend, a great wit and a unique member of our past pupils.” 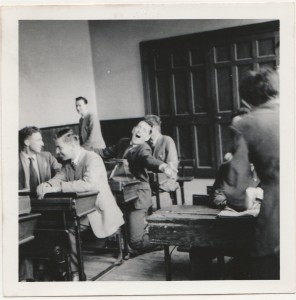 From the Belvedere College archives, a photo of Terry Wogan as a pupil – ‘ever the entertainer’.

“Even as a student, his special talents were clearly in evidence – whether performing with distinction in the school opera or simply keeping his friends continually entertained quite effortlessly.”

“The photograph of him in his school desk, captures that “Ta da” moment of a young man entertaining his classmates.  He attended the class 40th reunion in 1996 and he continued that tradition at their 50th reunion dinner in 2006 where he was the guest speaker.”

“It was a wonderful evening and his sharp but gentle wit, entertained the gathering. He was at ease and unassuming in company and in the banter with his classmates it was obvious that he enjoyed a great relationship with them.”

“It was an evening of funny anecdotes and fond memories of his friendships in the college. His friends said he was ‘the same Terry’ on or off air, and that he was a gentleman in the very finest sense of that word.” 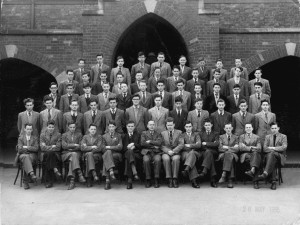 “His classmate and close friend, Frank Young, who was the President of the Past Pupil Union in 2009, commented, “On a personal note, he and I were friends for over 60 years. We ‘shared the boards’ in The Gondoliers in 1956 and cycled home together after school through 5th and 6th Year.”

“On these trips we would replay together the previous night’s comedy shows on the BBC – including the much loved Goon Show. Little did I know that within a few years he would be interviewing and co-starring with those same BBC ‘greats’ and indeed the top names of film, stage and sport from around the world.”

“His last visit to the school was when he memorably addressed the past pupil’s Union Dinner in November 2009. Again, he entertained us all with his humour and mischievous wit.   He remained interested in how Belvedere College SJ was developing. Even as a young man, when he was well known in RTE, he helped the Belvedere Ladies Committee when they were fundraising in the 1960s by acting as the presenter for the event.”

“Recently he supported the college bursary programme, which assists 10% of the students, who come from a socially disadvantaged background and he introduced the video promoting the fundraising for the Social Diversity Programme.”

“Like many Irish who lived in England during the IRA bombing campaign, I appreciated Terry’s role as an Irishman who was proud to be Irish in very difficult circumstances.”

“Others who lived there through the most violent times during the troubles, have said that Terry did a lot in promoting tolerance. He has inspired so many, including past pupils, who went on to be broadcasters.”

“As the clips from his career are replayed, we will smile and undoubtedly laugh at his witty and intelligent humour.”

“No doubt, his family and friends will mourn the loss of a great man who has been such an ambassador for his country. His classmates will remember a friend and fellow past pupil, proud to be associated with the college. All of us express our sincere condolences to his family on their sad loss. May Terry rest in peace.”