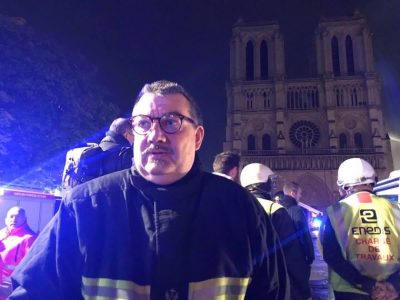 The bells of St Patrick’s Cathedral Armagh will be rung at 6.50 p.m. this evening in solidarity with the people and priests of the Diocese of Paris over the fire which ravaged Notre Dame Cathedral.

Archbishop Eamon Martin, Primate of All Ireland and Archbishop of Armagh, announced the gesture of solidarity on Tuesday, noting that Archbishop Michel Aupetit of Paris and his flock will have to gather for the Chrism Mass away from their mother church of Notre Dame.

On Tuesday, Pope Francis spoke by phone with the French President, Emmanuel Macron, and expressed his solidarity with the people of France in the aftermath of the fire.

In an address to the nation, President Macron vowed to rebuild the Notre Dame cathedral within five years.

“We have so much to rebuild. Yes, we will rebuild the cathedral and we will make it more beautiful and I want that to be done in five years,” he said.

Over €700 million has already been pledged towards the reconstruction fund by French billionaires such as Bernard Arnault and Francois-Henri Pinault along with L’Oreal, the Bettencourt Meyers family and French oil and gas company Total.

On Tuesday, the Pope also sent a message to Archbishop Michel Aupetit of Paris and told the French prelate, “Following the fire that ravaged a large part of Notre Dame Cathedral, I join you in your sorrow, as well as that of the faithful of your diocese, the inhabitants of Paris, and all the French people.”

He assured all the people of France of his spiritual closeness and prayers during Holy Week, as the Church recalls Jesus’ passion, death and resurrection.

He called Notre Dame “an architectural jewel of a collective memory”, and said it was “the location of many great events and a testimony to the faith and prayer of the city’s Catholics.”

Pope Francis expressed his appreciation for the courage of the firemen who managed to contain the blaze.

“May Notre Dame Cathedral once again become – thanks to reconstruction efforts and the mobilisation of all – a sign of the faith of those who built it,” the Pontiff said and added that the 860-year-old Gothic masterpiece represents “the architectural and spiritual heritage of Paris, of France, and of all humanity.”

Over 400 firefighters tackled the huge blaze and were praised for their unstinting courage and hard work.

Among those singled out for special praise was the chaplain to Paris Fire Brigade, Fr Jean-Marc Fournier, who saved the Blessed Sacrament and the Crown of Thorns from the burning cathedral on Monday night when he bravely went in with firefighters.

It had been feared that most of the religious artefacts would be lost in the raging fire.

Fr Fournier also showed great bravery in the immediate aftermath of the 2015 Bataclan attack, when he tended to the injured and prayed over the dead after Islamic State terrorists murdered 89 people using guns and explosives.

“I gave collective absolution, as the Catholic Church authorises me,” Fournier said at the time.

Fr Fournier, who is in his 50s, previously spent seven years with the French armed forces, including a tour in Afghanistan.

Separately, Irish priest Fr Aidan Troy, who is based in Paris and ministers at St Joseph’s parish to the English-speaking community and hears confessions once a week at Notre Dame, said the tragedy was “one of those moments that just touch your soul”.

Speaking to the Irish Times, Fr Troy, a Passionist, stressed that Notre Dame is “an active, working parish as well as an iconic building”.

He explained that he stood until after midnight watching the 12th century cathedral burn.

“There was a sombre mood, and a mood of reverence, and a tremendous sense that we were seeing something unfold before our eyes that nobody could have imagined.”