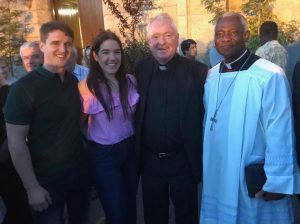 Bells rang out all over Ireland to mark the opening of the 9th World Meeting of Families on Tuesday 21 August. Each of the 26 diocesan cathedrals hosted a special liturgical ceremony with Evening Prayer entitled Le chéile le Críost (Together with Christ).

The liturgical celebrations reminded those present that they walk in the footsteps of the saints and those who have handed on the faith.

The ceremonies involved singing and praying hymns, psalms and canticles, burning incense and praying for the entire human family before God and Father.

Representatives from each parish were present as well as international pilgrims at the opening Evening Prayer at the RDS, Dublin. There, Most Rev Diarmuid Martin, Archbishop of Dublin, welcomed everyone, noting that after many months of preparation, the World Meeting of Families had arrived.

He said that there are people who would look at the World Meeting as “some sort of ideological gathering to celebrate a type of family which probably does not exist”. However, he said: “The family is not a remote ideological notion but the place where compassion, kindness, gentleness, patience and forgiveness are learned, practised and spread.”

This is not so easy and people struggle, fail and are unfaithful. St Paul recognises that people fail, but stresses that what is important is that efforts are “clothed” in love.

“Only the power of love can purify and restore and heal our weakness,” Archbishop Martin explained.

He added that the World Meeting of Families “is called to challenge all our stereotypes. The family is not a closed place but must always be missionary and have that same drive towards the periphery, towards those who are marginalised, which Pope Francis presents as a fundamental dimension of the Church.” 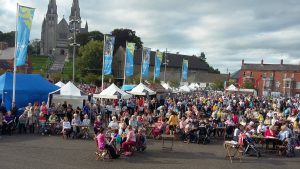 At St Eugene’s Cathedral, Derry, Bishop Donal McKeown in his homily expressed the hope that Pope Francis will place a mirror in front of both Church and State.

“I hope he will ask awkward questions and speak the truth in love about how the Church needs to repent and equip itself if it is to be a credible witness of God’s mercy and love in 2018,” he said.

He also prayed that Church and State learn from the mistakes of the past and do not just look backwards or engage in a blame game. Leaders of Church and society are asked in the gospels to “take the plank out of their own eyes first so that they can see where the uncomfortable truth lies”.

He hopes that the World Meeting of Families and the visit of Pope Francis will inspire dioceses, parishes and families to build community in the face of an epidemic of loneliness in a frightened world where harsh words often seem to dominate.

“Some will seek to criticise the messenger in order to avoid engagement with the message. But as we approach important decisions about the future of this island, this World Meeting will challenge us all to prioritise building a healthy society and not just growing market share, to inspire a new generation of Irish people with a vision for the future as we learn from the past,” he said.

He said that WMOF is an invitation for all to reflect – not a time for quick, smart answers but for thoughtful listening. It is also an important stage in an “adult conversation” about what a “new Ireland” would look like.

“It is a key moment in discerning what a renewed Irish Church will look like as it seeks to play a positive and prophetic role in civic society,” he said. 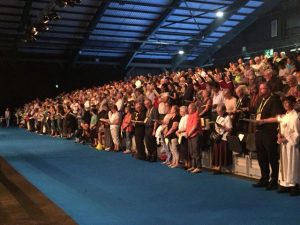 Some 37,000 people from 116 countries across 5 continents have registered to attend the 3-day Pastoral Congress at the RDS in Dublin . Not all of the 15,000 overseas visitors had arrived on Tuesday evening, but there were already many from Canada, France, Poland, Guatemala and France.

Gerard and Rita McCarthy, an Irish–Canadian couple from Newfoundland, were at what was their second World Meeting of Families. They have been helping troubled couples for the last 15 years and said they have seen many instances of healing grace. Also present were 21 pilgrims from all across Nigeria, accompanied by Archbishop Valerian Okeke, from Onitsha, Archbishop Augustine Akubeze of Benin City and Fr Michael Madu.