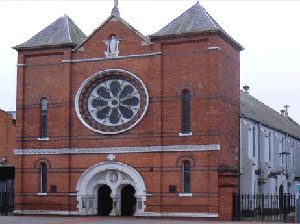 Belfast’s oldest Catholic church is set to reopen for Mass next week after undergoing months of painstaking renovations.

St Mary’s Catholic Church, in Chapel Lane, close to the city centre, underwent both external and internal restoration between May and August, and while it has been used for Mass during that time, the Living Youth building, beside the church, has been the venue for Mass since 17 July.

In an update to parishioners in the parish bulletin recently, the Administrator of St Mary’s, Fr Boyle, said: “This work will continue for an additional period of three weeks, allowing the church to be re-opened (we hope) for Mass on Sunday 27 August.”

He confirmed that the total renovation work, expected to cost more than £300,000, was initially due for completion by Friday 18 August, but was delayed for a few weeks to allow for the remaining amendments to the church exterior.

Commenting on the works, the St Mary’s administrator said “The storm-glazing to the windows to the front elevation has been removed and will be replaced. The statue of Our Lady of the Garden, which is currently located in front of St Mary’s Hall, will be relocated to [the] grassed area and will be placed on an elevated base.”

Fr Boyle added that “These additional external works will also extend beyond the projected completion date of 18 August by a period of 2 to 3 weeks. Therefore, all additional work should be fully complete by Friday 8 September.”

St Mary’s Church in Belfast is one of huge historical significance. The Census in 1782 showed that there were 365 Catholics living in Belfast. At that time, there was no Catholic church in the city.

The Presbyterian and Church of Ireland communities took up a special collection known as the Handsome Collection at their services and made a gift of the monies donated to build the first Catholic church in Belfast – St Mary’s, Chapel Lane.

The generosity of the Presbyterian and Church of Ireland people of Belfast demonstrates the unprecedented religious tolerance of that time. It was on Sunday 30 May 1784 that Mass was celebrated for the first time in the Church of St Mary by Fr Hugh O’Donnell, first parish priest of Belfast, making it Belfast’s oldest Catholic church.