Belfast priest proud of family role in Battle of the Somme 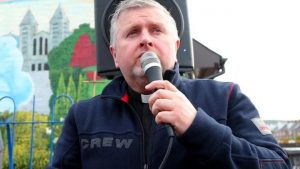 A prominent Belfast priest has said that he is proud of one of his relations who fought at the Battle of the Somme.

North Belfast-based priest Fr Gary Donegan CP, who is Rector of the Holy Cross Church on Belfast’s Crumlin Road since 2008, revealed that his great grand-uncle Bob West fought with an Irish Regiment at the Battle of the Somme and was later decorated for his courage.

Speaking to the Belfast Telegraph newspaper, Fr Donegan who has been the subject of a number of threats from dissident Republicans said, “When you look back and see the slaughter of so many young men in such battles as the Somme I think the least that people can do is remember them.”

The Passionist priest, who is a native of Co Fermanagh, said that he attended a dinner recently in Belfast City Hall to remember all those killed in the Battle of the Somme and a few weeks previously he also attended a dinner in Belfast to mark the 100th anniversary of the Easter Rising.

Fr Donegan said that he felt it was important, “for people like me to be seen at all of these things. I am typical of all people across Northern Ireland whose family backgrounds are complex.”

He added, “I have a Protestant aunt and uncle and cousins and there are many people on the island like me who have a mixture of everything.”

Fr Donegan said that he welcomed the greater appreciation among Catholics and Protestants nowadays about the role played by both communities in events like the Somme.

“Many of those who joined the army may have done so because of poverty at home, or for adventure or just to see the world. What happened to them is almost beyond comment. As has been so often said war is old men sending young men out to die.”

Fr Donegan revealed that recently he attended a lecture by Ulster GAA at Queen’s University which outlined how former players were involved in various wars. “It was a real eye-opener for many of the people who were present in the room,” he said.

He added, “I am very proud of my great grand Uncle and what he did. As a priest and a pastor, I don’t agree with war, but he went and did what he did, and I am the last person to deny what he did. His courage was immense.”