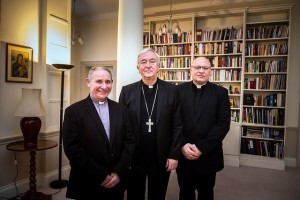 The episcopal ordination of Canon Paul McAleenan, the auxiliary bishop-elect in the Diocese of Westminster who was born in Belfast, will take place on 25 January in London’s Westminster Cathedral.

The 64-year-old will be ordained an auxiliary along with Mgr John Wilson, a priest of the Diocese of Leeds.

Responding to the news of his appointment, he said he accepted it “with a sense of inadequacy and unworthiness”.

He added, “To be a bishop was never a part of my plans and certainly not my expectation. I know it is only with the help of God I can carry out this ministry in a way that is pleasing to him.”

He was appointed a member of the cathedral chapter 2010 and was named as auxiliary bishop of Westminster by Pope Francis on 24 November 2015 with the Titular See of Mercia.

Cardinal Vincent Nichols, Archbishop of Westminster, said he thanked God for this gift of two new bishops for service in our diocese.

“As Pope Francis has made clear, the name of a new bishop is written by Jesus himself. So today I say ‘Thanks be to God!’ I am also most thankful to Pope Francis for this important strengthening of our diocesan family in our striving to be faithful to the Lord and to the mission he has given to us all.”

He continued, “The role of the bishop is one of demanding service and here we are blessed by these additions to the oversight and encouragement which we can offer, in the name of the Good Shepherd, to our priests and people,” Cardinal Nichols said after the announcement.

The Cardinal added, “Bishop-elect Paul McAleenan has served this diocese for many years and now he will continue to do so in this new ministry. He steps forward for this ordination from the ranks of much-loved parish priests, whose faithful service and generosity are deeply appreciated.”

“His experience and voice will be a great addition to the Episcopal ministry we can offer together.”