Public invited to record CS Lewis’ impact on them 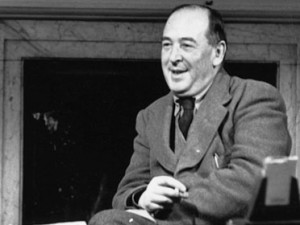 The public have been invited to record CS Lewis’ impact on them in a new book which has been commissioned to mark the 50th anniversary of the death of the renowned Christian apologist.

A specially commissioned leather-bound book titled ‘CS Lewis’ Chapter One’ has been opened in St Anne’s Cathedral in Belfast into which the public can record their thoughts on the writer.

The novelist, academic, Christian apologist and good friend of  JRR Tolkien was born in Belfast in 1898 and died in 1963 in Oxford.

The book of reflections was launched on Friday 22 November, the 50th anniversary of CS Lewis’ death, and it will remain open to the public until Friday 29 November, the date of his birth.

The project has the support of the Lord Mayor of Belfast, Máirtín Ó Muilleoir, as well as local artist Ross Wilson, whose bronze sculpture of CS Lewis can be seen at Hollywood Arches in Belfast.

On Tuesday 26 November, the Lord Mayor and Ross Wilson will both add their thoughts to ‘CS Lewis’ Chapter One’.

St Anne’s Cathedral has many links with CS Lewis’ family. His uncle Sir William Ewart and several of the Ewart family are commemorated in the Cathedral.

According to Cathedral Librarian, Paul Gilmore, “George Herbert Ewart was a linen manufacturer and member of the Board of the Cathedral from 1903 until his death in 1924. His widow and children had the Pillar of Industry carved in his memory in 1927.”

“James Mathewson Ewart, the fourth son of Sir William Ewart and Lady Isabella Ewart, was born in Belfast in 1854 and died in New York in 1898. A reredos carved by Rosamund Praeger, ‘As the Shadow of a Great Rock in a Weary Land,’ now stands in the Ambulatory as a memorial to him.”

But according to the librarian this Lewis event is about the author in his own right, as a storyteller, scholar and Christian apologist.

“We have chosen to commemorate Lewis in a large leather bound book which has been specially made for the occasion,” Paul Gilmore said.

“We have called it ‘CS Lewis’ Chapter One’ because Lewis saw death as beginning ‘Chapter One of that great story’ and this fits with the theme of this event because it is not simply about remembering someone who died the same day as JFK and Aldous Huxley. It is about celebrating his enduring legacy.”

He continued, “That is why people are invited to contribute a line or an essay, a comment or a quotation, which captures for them how Lewis’ legacy has enriched their lives and fed their imagination.”

The book has been crafted to resemble a leather bound book referred to in ‘The Lion, the Witch and the Wardrobe’ (‘…a whole series of rooms that led into each other and were lined with books – most of them very old books and some bigger than a Bible in a church’).

All ages are welcome to write in the book ‘because all ages read Lewis’.

Lewis is best known series of book, the Chronicles of Narnia, which have sold over 100 million copies while he best known work as a Christian apologist, ‘Mere Christianity’ still sells 250,000 copies a year.

Speaking to the Belfast Newsletter, University of Ulster professor John Gillespie said, “It is amazing. CS Lewis’ popularity and influence is greater now than when he was alive, and greater now than JFK and Aldous Huxley, who died on the same day. Why is this?”