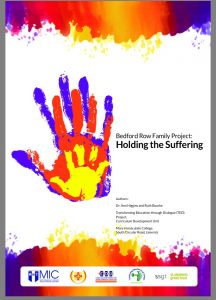 The Bedford Row Family Project: Holding the Suffering research report was officially launched by Emily Logan, Chief Commissioner, Irish Human Rights and Equality Commission. It identifies the model of service delivery of the Bedford Row Family Project (BRFP). Written by Dr Ann Higgins and Ruth Bourke of the Transforming Education through Dialogue (TED) Project, MIC, and funded by the St Stephen’s Green Trust, the report also examines the impact of engagement with BRFP for the many children, adults and families involved and makes recommendations to improve the service.

A key component of the model of service of the BRFP is that people who attend the services are provided with opportunities to express themselves creatively in the broadest sense. Opportunities for creativity are provided through art, music, poetry, cooking and baking, drama and creative writing and also through opportunities for creative expression in ceremonies and celebrations. The report launch also saw the unveiling of some of the art work produced by members of the BRFP.

According to the authors, Ruth Bourke and Dr Ann Higgins, the research found that the BRFP had a profound impact on the quality of lives of people who used the services. The support offered to prisoners, former prisoners and to families of prisoners to manage the prison sentences and to prepare for transition out of prison and back into family and society, were deeply appreciated by the people interviewed.  Essentially, engagement with the BRFP nurtured hope, built resilience and helped individuals and families to believe that a better future was possible.

Launching the report Emily Logan stated, “This research is an invaluable contribution to our understanding of the impact of imprisonment on families in Ireland. It clearly demonstrates that when we design services which have human rights and equality values, such as respect, participation, dignity, at their core, it is possible have a transformative effect on lives. I hope the recommendations set forth in this research will allow the Bedford Row Family Project to continue to grow from strength to strength. I also hope this research will reach wider audiences and will be brought to bear on the development and improvement of services for individuals and families affected by imprisonment nationwide’’’.

The full report can be accessed at http://www.mic.ul.ie/ted/Documents/BEDFORD.