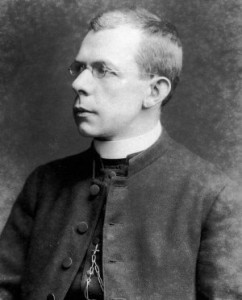 A campaign is underway to open the cause for the beatification for a heroic young priest priest who died on the Titanic, ministering to passengers.

His parish had organised a special collection to fund the trip.

Eyewitness reports say Fr Byles had celebrated Mass for second-class passengers on the morning of the disaster.

When the ship hit the iceberg and begun to sink, Fr Byles was offered a lifeboat place several times but he refused, staying on to help others, hear confessions and pray with those still on board.

In the ship’s final moments, Fr Byles prayed with the 100 plus passengers trapped at the stern.

Protestants, Catholics and Jews knelt in the rising waters as he gave absolution to all. His body was never recovered.

Later Fr Byles’ family had an audience with Pope Pius X, who described him as a ‘martyr’.

Fr Byles was originally from Staffordshire. The son of an Anglican vicar, he converted to Catholicism. He was ordained as a priest in 1902 and came to the Essex parish in 1905.

The inscription reads: ‘Pray for Rev Thomas Byles, for eight years rector of this mission. In his heroic death in the disaster SS Titanic April 15 1912 he earnestly devoted his last moments to the religious consolation of his fellow passengers’.

In 2012, a memorial plaque commemorating Fr Byles was unveiled at his old school, Rossall Public School in Fleetwood, Lancashire, by Bishop of Lancaster, the Right Rev Michael Campbell.

The current parish priest at St Helen’s church says he believes Fr Byles is a saint.

Fr Graham Smith told the BBC, “He was an extraordinary man who gave his life for others.”

“We need, in very old parlance, to raise him to the altar which means that the Vatican will recognise him as a martyr of the church.”

He added, “We are hoping and praying that he will be recognised as one of the saints within our canon…. We hope people around the world will pray to him if they are in need and, if a miracle occurs, then beatification and then canonisation can go forward.”