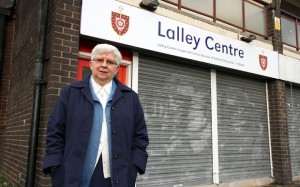 Presentation Sister Rita Lee (70), who works in the Collyhurst region of Manchester where she runs at food bank at St Malacy’s Primary School, recently met with the British Minister for Work and Pensions, Ian Duncan Smith MP, to voice her concerns.

Speaking this week Sr Rita said that with 13 million people living below the poverty line in Britain, and food banks being used to feed over a million people over the last year, of which 396,997 were children, there are continued pleas nationwide for emergency support.

She said in her meeting with Mr Duncan Smith she urged the British government not to “cut the benefits of the less well off”. She also revealed that the “told him sanctions were cruel”.

Last week she was the focus of a five-part BBC series, ‘Sister Rita to the Rescue’, which aims to highlight the plight of young families and those on low salaries who are affected by government cuts and sanctions.

Speaking to the BBC Sr Rita said, “I’m not a politician, but I know that more needs to be done. I want social enterprise, either a supermarket or things built here to build jobs. It will help lift people out of the poverty, creating businesses will also provide jobs for people.”

Of the work she does, Sr Rita said that every individual seeking their help is assessed based on their benefit and employment documents when the food bank is open every Wednesday and Thursday.

“I am supported by a team of volunteers, and together we are a mighty force, we do all that we can for the people. The reason people come to the food bank is because they have concerns and problems to begin with. We help them to sort their problems out and make sure that they have enough money coming in to keep the children fed.”

Sr Rita said she grew up in a very loving home and was the fourth of seven children.

Speaking about what convinced her to join the order at such a young age Sr Rita said, “The turning point came when I was 13 and two nuns from Manchester arrived to give a vocations talk. They talked to us about Manchester and the poverty, and they talked about the nursery they had. I loved kids. Still do. When they went from the room, I knew I was entering the convent in Manchester.”

The programme Sr Rita to the Rescue can be viewed on the BBC iplayer on http://www.bbc.co.uk/iplayer/episode/b06s6l45/sister-rita-to-the-rescue