A school project about flying mammals has developed into an initiative that makes localities more bird- and bat-friendly while also raising funds for projects that help people in the developing world.

BOB Boxes produced by the Salford office of CAFOD earn their name from the fact that they can be used to provide nesting spaces for birds or bats.

Generally, when a parish orders several BOB Boxes, it does so on the understanding that parishioners will purchase them to install them in their own gardens or localities. The boxes cost UK£2.50 (€2.75) to manufacture, but they are sold to schools and parishes for £10 (€11) each, so every box sold or sponsored raises another £7.50 (€8.25) for the Catholic Agency for Overseas Development, the English and Welsh bishops’ equivalent of Trócaire.

So far more than 2,000 BOB Boxes have been produced and sold. In 2011, the scheme won the Observer’s Ethical Award. Following that BOB Boxes were installed in the gardens of 10 Downing Street and Buckingham Palace.

When Pope Francis heard about them, he ordered some for his private garden in the Vatican.

Steve Burrows, of the Laudato Si’ Office in the Salford Diocese, said the idea for the BOB Boxes came about when he was teaching at a school for children special needs.

“I was teaching [the] children on the topic of mammals and flying mammals, in particular. I was looking for some way of making the learning real and of taking that learning outside the walls of the classroom and I came up with an idea for making bat boxes. Then I thought ‘Why not make them dual purpose, so they can be used as bird boxes as well?’.”

At the front of each BOB Box there is a hole with a stopper in it. If you want your BOB Box to be a roost for bats, you leave the stopper in place and bats enter and exit by a secondary entrance at the rear of each box. If you want to use a box as a bird nesting space, you remove the stopper, creating an entrance for birds such as tits, sparrows and starlings.

“You can tell when a BOB Box is being used as a bat box,” says Steve. “Because there is a big bat logo attached to the stopper that is fixed to the front of the box.”

Usually it takes some time before a BOB Box is put to use by a nesting bird or by a bat colony.

“The best result so far was in Stoneyhurst College,” said Mr Burrows. “We did a workshop with the students there on a Thursday evening and put up some boxes and by Saturday there was a female bat using one of the boxes as a place to hide her young.”

The BOB boxes are easy to assemble – all you need is a hammer and a screwdriver to put one together. Outside the classroom, constructing a BOB Box is an ideal joint project for a parent and child – so much so that the UK prison service has used them as an activity during family visits to prisoners.

The flat pack kits are manufactured in the workshops of HMP Buckley Hall in Rochdale, as part of a scheme to give offenders valuable life skills while they are also engaged in worthwhile and meaningful projects. 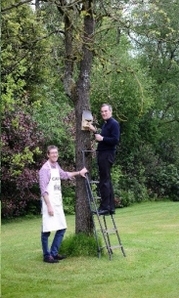 Among those who have constructed their own BOB Boxes is Bishop John Arnold of Salford, who has installed them in the grounds of his official residence, Wardley Hall.

Bishop Arnold is very enthusiastic about the scheme. He said that if 15 per cent of Catholics in the Salford Diocese purchased a BOB Box that would raise half a million pounds for CAFOD.

School and parishes who order sets of BOB Boxes on a sale or return basis get to decide how any money raised will be spent by CAFOD, via the charity’s Global Gift scheme.

For example, the sale of one BOB Box could be used to buy a Global Gift that would supply a family with a mosquito net to protect them from getting malaria and other insect-borne diseases. The sale of eight BOB Boxes would buy breeding chickens for a family; and the sale of 94 BOB Boxes would be enough to buy a community water supply.

Mr Burrows said he is delighted that his BOB Box scheme has taken wing so successfully. He said: “I love that they are making a difference on so many levels – here and in the developing world.”

If you would like to order BOB Boxes for your school or for your parish, contact [email protected] Irish customers will have to pay additional postage charges or organise their own delivery arrangements.