A documentary film about the plight of modern-day Bethlehem is being made available for private screenings in DVD form, thanks partly to funding by Trócaire, the Irish hierarchy’s aid agency. 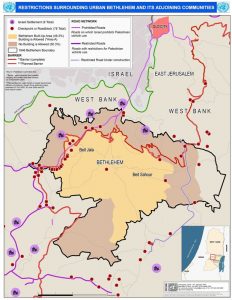 Open Bethlehem tells the story of Palestinian film director Leila Sansour’s return to the city where she grew up. When she left Bethlehem as a teenager, Leila saw it as a small, provincial place that held little attraction for her.

Nevertheless, as an adult, she returns to make a short portrait of the city as a tribute to her late father, who was a founder of Bethlehem University.

She finds the birthplace of Jesus Christ to be a city in crisis, mainly because of the severe restrictions being placed on the city by the Israeli government. The most tangible evidence of this is the anti-terrorist barrier, an eight metre tall concrete wall that surrounds the city. But local Palestinians are also denied access to key parts of the surrounding road network, and tourists/pilgrims can only visit Bethlehem briefly, using minibuses approved by the Israeli State.

As living conditions in Bethlehem worsen, more and more people are leaving. In particular, Bethlehem’s Christian community is emigrating. Reports predict that if trends continue, the Christian community of Bethlehem, a city that provides a model for a multi-faith Middle East, may be unsustainable within a generation.

Leila’s plan to stay and film for a year changes when her cousin Carol, her last relative in town, persuades her to stay to start a campaign to save the city. Thus Open Bethlehem is a documentary about Leila’s personal story and about the ‘Open Bethlehem’ campaign, which seeks to provide access for all to the city where Christ was born. 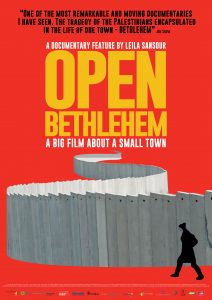 As part of the campaign, Leila and Carol devise a symbolic document, the Bethlehem passport, granting honorary citizenship to anyone who wishes to be a friend of the town.

Holders of the passport include the Church of England Archbishop of Canterbury Rowan Williams and Cardinal Archbishop of Westminster Cormac Murphy-O’Connor. Former US President Jimmy Carter is also a Bethlehem passport holder.

In the end, Leila decides to stay in Bethlehem for five years and shoots more than 700 hours of footage. Indeed, she collects so much archive material that it has formed the basis for a new Bethlehem museum.

The final 90 minute long film has been very well received. The Guardian newspaper named it a ‘film of the week’ earlier this year and the Channel Four broadcaster John Snow described it as “one of the most remarkable and moving documentaries I have seen”.

To order a copy, visit http://www.openbethlehem.org/store/p10/Open_Bethlehem_-_DVD_Region_Free.html.