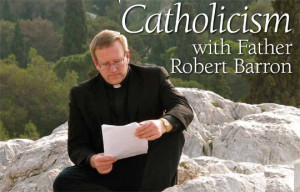 A course on what Catholics believe and why is proving a popular means of deepening the faith for many Irish people during the Year of Faith.

American writer and theologian, Fr Robert Barron used film to illustrate the richness of the Catholic Church’s global culture, the extraordinary beauty of its art and architecture, and the depth of its faith, in his acclaimed Catholicism series.

Fr Barron’s series has been televised on stations such as EWTN but what is proving even more effective in faith formation are the courses based around the DVDs.

The course which ties in with the series is based around scripture, the catechism of the Catholic Church and the writings of the Church’s spiritual masters. It has received rave reviews all over the world.

Last year, the first part of  Fr Barron’s presentations ran in many Irish parishes, including Newbridge in Kildare, where the second year of the course continues this autumn.

In Prosperous in Co Kildare,  Máire O’Byrne, author and graduate in theology, will lead another course, which is being held at the Focolare Centre, Curryhills House.

“I think Robert Barron’s course is essential for anyone who wants to know what it means to be a Catholic in today’s world,” Ms O’Byrne, an author and graduate in theology, told CatholicIreland.net

“Fr Barron brings new light to the fundamentals of our Catholic faith in a way that is both educational and captivating,” she added.

Mary McDonagh from Templeogue is part way through the series. “I’m definitely getting something out of it,” she told CatholicIreland.net

“I see a richness in Catholicism that I didn’t see before and this is so needed at a time like this when people often are so against it.  I feel it in a different way, and of course when you feel something inside, then it is easier to pass it on.”

Mary said she found the study element of the course challenging, but added that “people can take the study at their own level”. 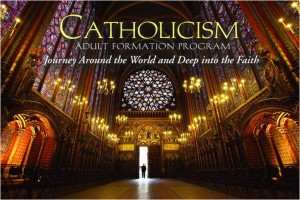 Veritas supplies the DVD box set and supporting course material.  A spokesperson told CatholicIreland.net that it is “very popular indeed”.

Filmed in 50 locations across 15 countries, the DVDs reveal the truths of the Catholic faith in a visually breath-taking and compelling way, with original, high-definition cinematography. “The DVDs make a great impact,” according to Mary McDonagh.

Accompanying the DVD is a companion study lesson with commentary, questions for understanding and also questions for application to each participant’s own life.

If participants want to go deeper, there is a companion book: CATHOLICISM: Journey to the Heart of the Faith, based on a more detailed rendering of the scripts from the DVD series.