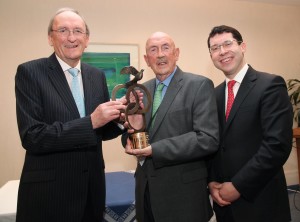 In a tribute, Senator Mullen said Barney Curley had used his “unusual and intriguing talent to transform countless lives”.

He has raised millions of euro for schools and hospitals in Africa.

On Thursday, the Ceann Comhairle, Sean Barrett TD, presented Mr Curley with the award which he jointly shares with Direct Aid for Africa, the charity he co-founded in 1997.

Famous for his gambling exploits at the expense of bookies, Curley co-founded DAFA after the death of his son Charlie in a car crash.

In his tribute, the Ceann Comhairle said, “Barney Curley is in many ways an unlikely hero. Here is a man who is transforming countless lives through tireless fundraising for some of the world’s most underprivileged people. That deserves to be celebrated and honoured.”

The charity, which benefits hugely from Curley’s role and from money sourced from his contacts in racing, has contributed over €5.75 million to various humanitarian projects, mainly in Zambia. Major figures in racing, including Sheikh Mohammed, have donated thanks to Curley’s intervention.

Curley and DAFA were proposed for the award by Senator Rónán Mullen at the October meeting of the Oireachtas Human Dignity Group.

“Our world needs heroes,” said Senator Mullen who introduced the award ceremony today. “Barney has used his unusual and intriguing talent to help the most vulnerable people in the world.”

The Oireachtas Human Dignity Group promotes discussion in Leinster House about the importance of respecting human dignity at all stages of life.

Membership is informal, and the Group’s activities are open to all members of the Oireachtas and MEPs who share its aims and are interested in participating.

Curley is only the second recipient of the honour. Last year’s inaugural award was presented to Magnus MacFarlane-Barrow, founder of Mary’s Meals, in December.

Barney Curley was born in Irvinestown, Co Fermanagh. He went to work in a plastic factory in Manchester aged 16, spent several years as a Jesuit seminarian, and has managed several pop bands, including ‘Frankie McBride and the Polka Dots,’ the first Irish band to enter the British Top 20 charts.

He is most famous for his successful gambling exploits, tireless fund-raising and generous philanthropy.

He rose to prominence after pulling off one of Ireland’s most famous betting coups at Bellewstown racecourse on 26 June 1975. That afternoon, Yellow Sam won at 20-1, and Barney and his friends netted around IR£300,000 — over €3.1 million in today’s terms.

Bellewstown recently celebrated the 40th anniversary of this event by staging a specially commissioned play, Yellow Sam, at this year’s race meeting.

Described by one racing industry analyst as “by far and away the most intriguing man in racing,” Curley made further headlines last year when four horses linked to him won in races across the UK on the same day, reportedly costing bookmakers millions.

Paddy Power colourfully described it as “one of the blackest days in the history of bookmaking.”

More recently, Barney has challenged David Cameron’s policy concerning the refugee crisis, taking a very public stand on the issue by erecting a banner outside his Newmarket stud urging Mr Cameron to do more for those fleeing violence in the Middle East.

He has also volunteered to take refugees into his own home.

Barney is married to Maureen, whom he met at Killarney racecourse. He has been based in England since 1982, and currently lives near Newmarket.

Although he retired from training in 2013, he continues to help the underprivileged through DAFA (Direct Aid for Africa), a charity he co-founded after the death of his son, Charlie, in 1995.

Hailed by many in the horse racing community as a ‘Robin Hood’ figure who steals from the rich to give to the poor (The Economist, December 2014), his creative approach to work and single-minded dedication to helping the world’s most underprivileged people makes him a deserving recipient of the 2015 Oireachtas Human Life, Human Rights and Human Dignity Award.

The work of DAFA (Direct Aid for Africa) is focused mainly on healthcare and education. DAFA has recently worked to get the Kavu Health Centre in rural Zambia upgraded to hospital status in order to provide better care to local people.

The charity has contributed significantly to the expansion of the Kavu Centre, improving the laboratories, building additional surgical theatres, and sponsoring the purchase of advanced equipment for the diagnosis of HIV and TB.

DAFA is also to the forefront in promoting e-learning in Zambia. It established an e-learning centre in the country, which offers distance-learning diploma courses in conjunction with Omagh South West College in Northern Ireland.

The first students of the pilot programme graduated in October 2014. DAFA hopes to help offer a foundation degree programme through the University of Ulster in the future.

Donations are possible through the following accounts: