Barnardos supports more children than any year on record 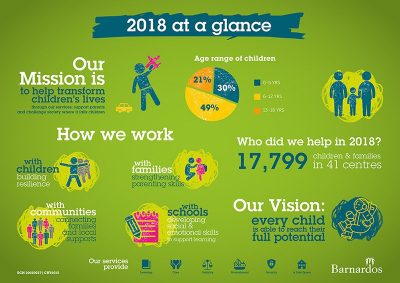 Last year Barnardos saw a 16 per cent increase in demand for its services and supported 17,799 children and families – more than than any other year on record.

“Our team is working hard to ensure we can deliver services to those who need them the most – but waiting lists for our services keep growing and the gap between the demand and the funding provided by the government continues to widen,” said Suzanne Connolly, Barnardos CEO, at the launch of the Annual Report 2018.

“Today, as a provider of services to the most vulnerable children and families in our society, we appeal to the government to significantly increase our funding in the next budget,” she said. The funding shortfall is €8 million annually and has to be found by Barnardos by fundraising.

During 2018 Barnardos worked with children to build resilience; with parents (and aunts, uncles and grandparents) to help them strengthen parenting skills; and within communities to connect families with local supports.

In the annual report Suzanne Connolly gave the example of a young woman who had an alcoholic father as a child and as a teen met a violent partner. Barnardos supported her to become the mother her children needed and ultimately to leave the abusive situation she and her children were in.

In his Chairperson’s Report David Begg highlighted that an estimated 15 to 20 per cent of children in Ireland experience some social and emotional difficulties that make them vulnerable. Going by Central Statistics Office (CSO) statistics, that would amount to 180,000 children. While some of these children have the family and social support to help them cope, some do not and this is where Barnardos can help.

David Begg also stated the housing crisis is damaging thousands of childhoods when children find themselves in emergency accommodation or overcrowded or substandard housing. He said that there are thousands of children not counted in the official figures but who suffer hidden homelessness.

“They are temporarily accommodated with extended family or friends, usually in overcrowded accommodation unsuitable for children. We continue to see the fallout from this

in our services around the country,” he stated.

This year Barnardos announced that it will become a trauma informed organisation that helps children and their families to build resilience and overcome the impact of adverse childhood experiences (ACEs).

Suzanne Connolly stated that difficult experiences in childhood can result in poor adult health and well-being as stated in the Centers for Disease and Control CDC – Kaiser Adverse Childhood Experiences (ACEs) Study.

“This new direction brings a holistic mind, body and heart approach to our work based on recent developments in the understanding of human development and how the brain works and builds on Barnardos’ approach to delivering essential services for some of the most vulnerable in our society,” added Suzanne Connolly.