A Cloyne diocesan priest has been named Apostolic Nuncio to Burkina Faso in West Africa.

As part of his appointment to the senior ranks of the Vatican Diplomatic Corps, Msgr Michael Crotty, aged 49, is to be made titular Archbishop of Lindisfarne.

Ordained in 1994, Archbishop-elect Crotty spent three years as a student at the Pontifical Ecclesiastical Academy’s Diplomatic School in Rome before taking up his first diplomatic posting in Nairobi, Kenya, in 2001. Since then he has served in the apostolic nunciatures in Ottawa in Canada, in Baghdad in Iraq, in Amman in Jordan and, most recently, in Madrid in Spain. 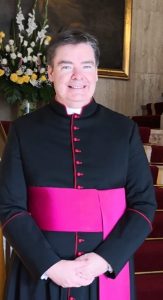 When he takes up his appointment later this year, Msgr Crotty will be located in Ougadoudou, the capital of Burkina Faso, which has a population of 17.3m people, with about 20% of these being Catholic. Sunni Muslims form the majority religion, comprising 60% of the population, but Islam and Christianity are heavily influenced by native beliefs in this landlocked West African country.

Last year, The Avondhu newspaper noted that well-travelled diplomat returned to his home turf to celebrate the silver jubilee of his ordination with friends and family. The newspaper noted that “this former Ballygiblin hurler” had “a firm grasp of detail and mastery of European languages”.

The monsignor will get plenty of opportunity to test his linguistic skills: Burkina Faso is a country with nearly 70 different languages.

Bishop William Crean of Cloyne said he was delighted to hear the news of the promotion. He said: “This is a great personal honour for Msgr. Michael as it is for his family and the Diocese of Cloyne.

The ecclesiastical see of Linisfarne dates back to the Holy Island of Linisfarne, off the coast of northeast England, where Irishman St Aidan founded a monastery in the seventh century. One of the previous holders of the title was the much liked Bishop Victor Guazzelli, auxiliary in Westminster, who died in 2004.