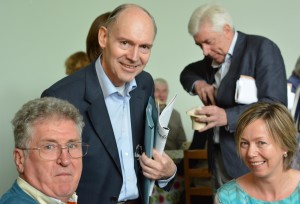 The Minister for Communications, Energy and Natural Resources, Alex White, has said climate change will be an election issue and that Irish agriculture has a role to play in helping the country tackle its greenhouse emissions.

Attending the National Conference on Climate Change and the Environment at the Church of the Ascension in Balally (Dublin), the Labour Minister said that farmers and the agricultural sector should contribute to managing the country’s agriculture and food production better and “contribute to the fight against climate change.”

Asked if farmers should be worried about the possible costs involved in adopting more environmentally friendly methods he responded, “I think we all have something to worry about including farmers.”

“The response to climate change comes with a cost – there is no easy way of delivering this. It is not something that will be cost neutral for any of us,” he said.

Recognising the concerns of people in rural Ireland around wind energy the Minister nevertheless warned, “Unless we replace fossil fuels with renewable energy we won’t make any contribution to the fight against climate change”.

The Labour Party TD said that for politicians the challenge will be that because there is a cost involved, “not a lot of people at the doorstep will respond all that kindly to that, particularly when the positive impact might not be seen for many years, maybe even for generations.” 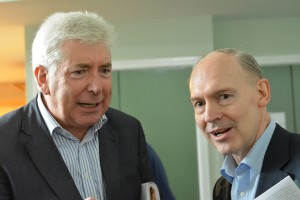 Minister for Communications, Energy and Natural Resources, Alex White speaking to Dr Dermot Lane, retired president of Mater Dei and organiser of the National Conference on Climate Change and the Environment at the Church of the Ascension in Balally.

Economist, Professor John FitzGerald, who is chair of the Government’s expert advisory council on climate change, gave the keynote address on ‘Ecology and Economics’.

In his address, he said that, “only the political process can deliver a solution for reducing emissions and addressing climate change” and he called for support for politicians who say they are going to do something to tackle climate change.

Professor Fitzgerald suggested that no change would come without making the market part of the solution.

Other speakers at the conference included Irish theologian, Dr Sean McDonagh who advised the Vatican on the early draft of Pope Francis’ encyclical, Laudato Si’ and Dr Lorna Gold of Trócaire who linked the refugee crisis with the consequences of climate change.

Dr Celine Mangan OP addressed the conference on Saturday on ‘What does the Bible Say?’ while Fr Padraig McCarthy gave an overview of the teachings of Laudato Si on Friday evening.

In her address ‘Policy for Church Leaders and Politicians’, Dr Lorna Gold warned that refugee crises will become “the new normal” as many factors contributing to the tipping point in the current crisis were linked to climate change. 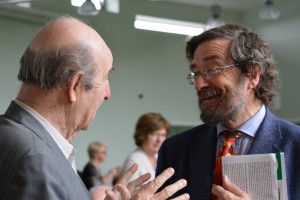 She highlighted how the situation in Syria began as a water and land issue which drove people in rural Syria to the cities and the matter escalated from there.

Referring to Laudato Si, she appealed to politicians and Church leaders to join the dots and recognise this as a justice issue.

Citing Trócaire’s five-country study on the impact of climate change she said it was apparent that small scale farming and the poorest were the worst hit.

Dr Gold underlined that the argument that Ireland is a small country was no longer an excuse for inaction and emphasised that our emissions are 80 times higher than some of the countries in Trócaire’s study. “So we are using up more than our fair share,” she warned.

Decarbonisation takes everyone and the challenge is to shift away from the ‘throwaway culture’ and its impact on the earth to an ethic of right relations with each other and the earth.

“Politics is capable for putting in place the right supports to make this happen,” and to shift economic policy away from short-sighted policies and what works for the few, she stated.

Urging people to make a personal commitment to change, she appealed, “Be the change that you want to see”. In this jubilee year she urged people to be merciful towards and the earth and pay their ecological debt.

She also urged people to use their power as critical consumers to send signals to the market while demanding structural change from politicians on the doorstep.

Dr Dermot Lane, the retired president of Mater Dei and organiser of the conference told CatholicIreland.net that the “primary purpose” of the conference was to “raise consciousness” among people of the importance of the encyclical.

He said his “fear regarding this wonderful encyclical is that it will become just another encyclical and an extra option whereas it must become part of the way we are and the way we live; part of our mindset but also part of our lifestyle – it calls for a radical conversion in lifestyle as much as in mindset.”

According to Fr Lane, it is “essential” that parishes get involved in promoting the teachings of the encyclical.

“We are hearing a lot about evangelisation – ecology is the new evangelisation. We need to be able to see that in and through good ecology we are in fact evangelising. That needs to be taken up in our parishes,” he said.

“What should be up in red lights is the whole area of conversion in terms of lifestyle and the way we live and the way we consume excessively. The real issue for me and this conference is summed up in the poem called ‘what did you do once you knew’.”

Columban missionary, Fr Sean McDonagh reiterated his call for a synod at parish and diocesan level to engage with the encyclical’s teachings and with issues such as energy usage, biodiversity and water.

He said Pope Francis had emphasised that concern for the earth is an essential part of our faith. “That comes from a document that Pope John Paul II wrote in 1990 after which nothing happened – the same will happen if there is no effort to engage with Laudato Si at the local level.”

“There is no point in putting our head in the sand and thinking it is not going to happen. The kind of Church that we want in the future is one where people take responsibility for the way they live and the context of their faith,” Fr McDonagh said.